Drivers unclear on 'rules of engagement' 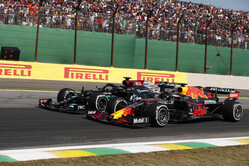 The decision not to review the Lap 48 incident in Sao Paulo has left drivers confused as to what is allowed and what isn't.

Ever since the infamous incident on the 48th lap of last week's Brazilian Grand Prix everyone has an opinion... and is only too keen to share it.

On Friday, once the FIA had rejected Mercedes request of a right of review, the drivers that comprise this weekend's grid discussed the issue as part of their customary driver briefing.

Despite a longer briefing than usual, they came away as confused as ever.

Asked what counts as hard and fair racing, and what, on the other hand, deserves to be penalised, Lewis Hamilton admitted: "It's not clear...

"Every driver, except for Max, was asking just for clarity," he continued, "most drivers were asking for clarity, but it wasn't very clear.

"So, yeah, it's still not clear what the limits of the track are. It's clearly not the white line anymore, when overtaking but... yeah, we just go for it.

"We just ask for consistency," he added. "So, if it's the same as the last race then it should be the same for all of us in those scenarios and it's fine."

"It is clear in that way that, if it's a similar incident to Brazil then that's OK," added teammate Valtteri Bottas, "but obviously it's always a fine line.

"But, yeah, consistency," he continued. "That's the key. For us to know exactly.

"I don't think we got really an explanation like what we actually can do, or not. So, I mean, every overtake, every defending is different.

"I'm sure they try to do the best job, giving the best penalties, or no penalties," he continued, "so I don't think it really changes anything.

"We'll obviously go for it and at least we know what Lewis and Max ended up having in Brazil, that is OK, so that is a good thing to know."

Told that there is talk doing the rounds that the stewards wouldn't necessarily make the same decision in the same set of circumstances as Brazil, Bottas replied: "That would be a bit weird, then we don't know what we're supposed to do, if that's the case. I don't know what to say."

"I don't really what to comment on that," he admitted. "I prefer to talk to the people in charge and just discuss with them about future things in general, not only like an incident or whatever."

Asked, in light of the review and the general feeling at the drivers' briefing, if he will change his approach, be more aggressive, Hamilton admitted: "Yeah, I guess so.

"Potentially, can't really... I would assume so, yeah."

"Yeah," added Bottas. "I mean if that's most likely going to be OK then obviously they can do it. It just depends on the situation, it's not like something had suddenly changed but it was good to get at least 20% of a confirmation that is OK. As they said, maybe it's not, maybe it is. We'll see."

Meanwhile, Lando Norris referred to the incident during the Styrian Grand Prix that saw him penalised after Sergio Perez went off whilst battling for position.

"Some of the things that we now understand means that I shouldn't have got a penalty," said the McLaren star. "But then also what types of surfaces are on the outside of the circuit, whether that's a hole or tarmac or whatever, can also have an effect, which I don't think may be fair or true.

"I think if you know there's gravel on the outside, and if you're not completely alongside me, which Perez wasn't, he's put himself in that very risky position," he continued. "That's the only thing that I believe now must have been the difference.

"He wasn't alongside me, all the way alongside me, it was like half a car. I gave still a bit of space for him to back out, it wasn't like I shoved him off, and there was no contact made.

"We only recently now believe that there was gravel and not tarmac," he added. "I feel like it's an unfair penalty that I got, but that's what I have to believe now is the difference from Max's one last weekend and my one, is that I had gravel."

"The fact that he attempted to pass and didn't make it, like he went off track, then that's not a pass," said the Australian. "There's no way someone should be able to keep a position by lunging from miles back and not staying on track.

"It's maybe the same as the situations last weekend," he added. "But yeah, it is true that the consequences do dictate a little bit of the overall decision, I believe."

"We will always try to race at the limits of what we are allowed to do," said Charles Leclerc, "and that's what I will do in case these things are allowed.

"Honestly, I really don't mind whatever is allowed, I just want it to be clear as a driver," he added. "That's the only thing that matters to me.

"If this is allowed, then overtaking around the outside will be very difficult," he admitted. "But yeah, whatever the situation, the decision is, I'll just adapt my driving to it, so I'm fine with both."

"The one thing that at least is clear in my head, or should be clear, if you attempt an overtake - so most likely you're on the inside and you attempt to undertake - and you don't stay on the track, and then the other guy obviously gone off the track as well that's a failed overtake.," said Ricciardo, who referred to last weekend's incident on the opening lap involving Leclerc and Perez.

"In a way, they were consistent with two of the same moves in Brazil, with Charles and Carlos, and Max and Lewis; they didn't give penalties, or make them swap positions for those two," said the Australian. "Whether that was right or wrong at least they showed consistency in two very, very similar incidents."