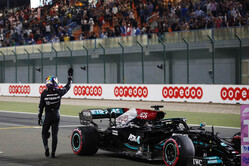 Lewis will start the Qatar Grand Prix from pole position after a stunning final lap in Q3, taking pole by four and a half tenths of a second. It is the 102nd pole position of Lewis' career and his 76th with the Team.

Valtteri was consistently quick throughout qualifying and will start P3, securing a spot on the second row and the clean side of the grid. Despite the slightly cooler temperatures of the evening session, grip levels continued to ramp up through qualifying, with lap times getting quicker and quicker.

Lewis set the pace after his opening run in Q3, before finding more time on his second lap, while Valtteri failed to improve on his final run but managed to retain P3. Both Lewis and Valtteri will start the race on the Medium tyre compound.

Lewis Hamilton: I'm very happy with that qualifying session. Yesterday was difficult for me, I wasn't feeling well on Thursday or Friday and then struggled in practice. So, I had to dig deep, I was here late last night working with the engineers and we found a lot of areas to improve. I felt fantastic today and slept very well last night, which made a big difference. We made some changes for FP3 and it seemed to work, and I was able to carry that into qualifying. That last lap was just beautiful, this track is amazing to drive and very fast, all medium and high-speed corners. In terms of the race, we don't have much experience at this track, but I don't think it will be the easiest of circuits to follow. It's also not massively degrading the tyres so it could be a one or a two stop, we'll find out tomorrow. It's a decent run down to Turn 1 and it's nice and wide, so we'll be giving it everything.

Valtteri Bottas: It's been a strong weekend for us but of course, I'm a bit disappointed about qualifying. I felt comfortable in the car yesterday, but I'm a bit confused what happened overnight, because I was missing some speed. I struggled quite a bit in qualifying, particularly in Turn 1, where I wasn't managing to get the tyres ready. We need to have a look into it, but I tried my best and squeezed everything out of the car. Still, it puts me on the clean side of the grid for tomorrow and we have both cars at the front of the pack. I don't have much to lose and we have options, with two cars against one Red Bull, so normally that's a good situation to be in. I'm sure it's going to be a close day tomorrow.

Toto Wolff: That was a spectacular qualifying session and what a lap by Lewis to take pole. This is the result of the hard work both in the build-up and during the weekend on understanding the car and finding the right set-up at this new track. Lewis found it today, he wasn't particularly satisfied yesterday but he had a great car in qualifying to put it on pole and he did so in dominant style. Valtteri was happier with the car yesterday and it wasn't quite in the sweet spot for him, but nevertheless, we can be satisfied with P1 and P3 on the grid, both on the clean side, for tomorrow. Hopefully we'll take this momentum into the race, we've got both of our cars starting at the front, which is a useful result for us, but I'm sure it's going to be another close one.

Andrew Shovlin: A very impressive lap by Lewis to take pole, we felt that this was within our reach today but a margin of over 0.45s was beyond our expectations. It's also great to have Valtteri up there in P3. Lewis has had a really solid day and he's been much happier with the car. Valtteri's session wasn't as clean, we really struggled to find him clear track for his out laps and that was the case on each run. However, it's a close call between whether you'd rather be second on the dirty side or third on the clean side and we'll not find out which is best until tomorrow. It's hard to know what to expect for the race having not been here before, the tyres seem to be behaving quite well although they are no doubt going to be running hot and overtaking is likely to be difficult. If we can retain the lead then we're in a strong position, but we've seen a lot of cars breaking over the kerbs here so there's a reasonable chance we'll get some safety cars or VSCs to mix things up a little.