Horner's criticism of marshals was not acceptable, says Masi 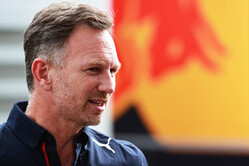 FIA race director, Michael Masi has defended the official warning issued to Christian Horner for comments made ahead of the Qatar Grand Prix.

Asked about the grid penalty handed to Max Verstappen for ignoring double-waved yellows at the end of Q3, Horner told Sky Sports: "I think it's just a rogue marshal that's stuck a flag out and he's not been instructed to by the FIA.

"They've got to have control of their marshals," he added. "It's as simple as that because that's a crucial blow in this world championship for us. We're starting P7 at a track you can't overtake at, that is massive.

"I think there needs to be some grown-ups making grown-up decisions," he continued. "Just having binary, somebody sticks a yellow flag out, it's just frustrating.

"I think the race director should have control of the circuit. He's the referee at the end of the day and otherwise anybody, you get a marshal that decides to stick a yellow flag out. How does that work?"

In the moments after the race the Briton was summoned by the stewards and subsequently issued with an official warning.

"I think you should not attack any person," said the Australian. "Particularly when we have thousands of volunteer marshals around the world, that give up a huge amount of time globally.

"Without them this sport that everyone has very close to their heart couldn't happen," he added. "All of them give up a huge amount of time. Without them, it won't happen. That's the part that a lot of people miss. And I will defend every volunteer official and every official at every racetrack around the world, that such criticism is not accepted."

Referring to the Q3 incident, he said: "With all yellow flags that are displayed from trackside, they're in the hands of the officials' control as they are at every venue anywhere. And if they deem that it's a single or a double, it's up to those officials to determine that. And they judge what they see before them.

"What the locals did, they reacted to the situation before them," he said. "And that's plain and simple. If you have a look at what was there and what was happening and with everything with Pierre's car, they acted upon instinct for what was before them.

"They acted in the best interest of keeping everyone safe on track. And I don't think anyone should be criticised for acting upon their instincts."

As unacceptable as Horner's comments were deemed to be, they pale into insignificance compared to Helmut Marko, who told DAZN: "It's ridiculous. You know the FIA can't organise a proper marshalling system and they are hiding their incompetence on the shoulders of the driver. Unbelievable."