Grid penalties for Norris and Ocon 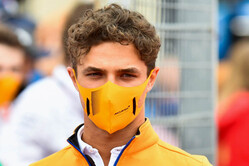 Lando Norris and Esteban Ocon both have grid penalties for the Mexican Grand Prix after taking on new engine components.

The McLaren driver takes on his fourth ICE (internal combustion engine), fourth turbocharger and fourth MGU-H, while the Frenchman takes his fourth ICE, turbocharger, MGU-H and MGU-K, and his third energy store and control electronics... not forgetting a ninth exhaust system.

McLaren announced the changes to Norris' car in the moments before FP3, teammate Daniel Ricciardo having taken a similar penalty in Turkey.

"Esteban will have a new engine for this weekend's Mexico City Grand Prix, his fourth of the season," said Alpine in a statement. "All components of the power unit will be brand new for qualifying and the race."

As a result, Norris and Ocon join Yuki Tsunoda and Lance Stroll at the back of the grid tomorrow, though the best performing driver of the four would get to start the race from 17th on the grid.

Despite the engine changes for Norris and Stroll, Mercedes remains confident that title hopeful, Lewis Hamilton can make it to the end of the season without further penalties.