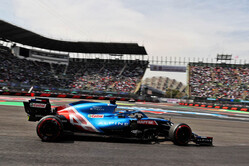 Alpine F1 Team got its weekend off to a solid start in today's Friday Practice at the Autódromo Hermanos Rodríguez, as the Mexican crowd were treated to Formula 1 cars in the flesh for the first time since 2019.

Despite being greeted with low levels of grip around the dusty 4.304km circuit, Esteban Ocon and Fernando Alonso completed a routine morning practice session with all their mileage done on Pirelli's Soft (C4) tyres.

Fernando saw several of his push laps spoilt by heavy traffic in the tight and twisty stadium section of the track, but still managed to steer his A521 nicely into seventh at the chequered flag on a 1min19.656secs. Esteban Ocon was only a tenth adrift of his team-mate and finished the session ninth on a 1min 19.759secs.

The afternoon promised higher grip and the tarmac's evolution didn't disappoint, with Fernando opting for Hard (C2) tyres and Esteban starting on the Mediums (C3). After some exploratory laps and with good grip clearly available, both cars soon switched to Softs.

Fernando - who will be looking to qualify inside the top ten tomorrow the first time in Mexico - completed his day in tenth position on a 1min 18.732secs with Soft tyres. Esteban, who also posted his fastest time on Softs, finished fourteenth with a 1min 19.431secs.

Esteban Ocon: "Firstly, it's nice to be back in Mexico as the last time I raced here was in 2018. On track, we had a productive day, which we can be pleased with. The track was quite dirty in the early running, but it improved as the day grew on. It's a different challenge to the previous race with the conditions and other factors, but that's something we enjoy as drivers as it's about trying things to find a good set-up. We've made a solid start to the weekend, which we're looking to build on. The car felt decent across both sessions and, as always, we have work to do overnight to keep improving."

Fernando Alonso: "The circuit started with very low grip today because of the altitude and it was very dusty this morning too which made it feel slippery in parts of the track. The track evolution is huge which is quite obvious when you look at the times from the two practice sessions. This makes understanding any changes on the car between FP1 and FP2 very difficult. We have some work to do, but let's see if we can find some solutions for tomorrow. It was good to be back to a relatively normal Friday for us, after a difficult one in Austin. It was also nice to see the passion of the fans here, it should be exciting tomorrow!"

Davide Brivio, Racing Director: "After a difficult weekend last time out in Austin, it was important for us to have a smooth and productive Friday practice here. Overall, we've had a decent day. This morning the track was dusty and quite low grip, but the performance started to get better and better as the track cleaned and improved. Also, for our drivers, it was good for them to grow in confidence at this circuit as the last time they raced here was in 2018. Free Practice 2 was quite an important session to understand more things with the track in much better shape. We did a good job and we collected a lot of information on both cars, which we will use to find improvements ahead of tomorrow. On a personal level, it's nice to be back in Mexico City. In fact, the last time I was here was for world superbikes in 1993 when the race was actually cancelled due to some interesting disturbances on track! I can say the track has certainly improved in that time into a fantastic facility."