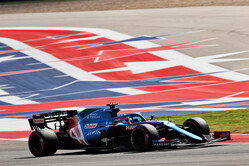 Alpine F1 Team finished today's qualifying with Esteban Ocon in eleventh and Fernando Alonso fifteenth for tomorrow's United States Grand Prix in Austin, Texas. Despite his efforts today, Fernando will start in nineteenth position on the grid following a penalty for changing to his fourth engine of the season.

In temperatures exceeding 30 degrees, both drivers left their nicely shaded garages in Q1 armed with Pirelli's red striped Soft (C4) tyres. Esteban and Fernando took two attempts each to progress to the next qualifying stage, finishing in thirteenth and fourteenth positions.

For their runs in Q2, Esteban opted for the (C3) Medium tyres with Fernando fitting Softs. Working as the chief tow operator, Fernando headed out first and assisted Esteban's two-timed efforts. Esteban's best attempt, a 1min 35.377secs, saw him slot into eleventh position, just narrowly missing out on the top ten shootout by two tenths of a second.

After his great supporting act, Fernando ended his qualifying in fifteenth position with an unrepresentative lap time of 1min 44:549secs.

Esteban Ocon: "I think eleventh was the best we could have achieved today, so all in all I'm fairly happy with the effort. It's been a tough weekend so far and we've not been in contention to reach Q3 and today we were just on the edge. We tried to go through Q2 on the Mediums, and we weren't too far away. Maybe on the Softs we could have made it, but we stuck to our plan with tomorrow in mind. Everything was a team effort today with Fernando helping with the tow in Q2. It worked well, but it was not enough to progress to Q3. Anything can happen in the race and strategy will be crucial. We'll remain positive and we will push hard for the race."

Fernando Alonso: "We had our own little battle in qualifying today with George [Russell] and Sebastian [Vettel] because of the engine change. Ultimately, we didn't really have the pace today, so we need to analyse all of this and try to understand it as it's not where we were in the last two Grands Prix. I tried to help Esteban with the tow today, but we were still missing a couple of tenths to be in the fight with the others. There is still a chance to score points tomorrow with a good strategy, so let's see how we get on."

Davide Brivio, Racing Director: "After today's qualifying, we've set ourselves up for an interesting position in the race. With Fernando's power unit change this morning, and the fact he will start from the back of the grid, we tried to make the most of that. The target was to have both cars advance to Q2 and then for Fernando to help Esteban out with the tow on the back straight. Both drivers showed excellent teamwork, with Esteban starting tomorrow's race in eleventh after running in Q2 on Mediums. Tomorrow we can definitely have an interesting race from those positions. We've seen Fernando come through the field already this season and that will be his target. Esteban will aim to have a good start and the hard work will happen overnight to prepare a strategy for that. We're looking forward to racing and the target is to score points."