"I felt this could be my day," admits Perez 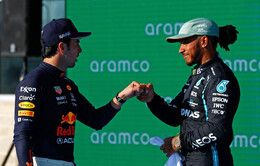 Admitting that he thought he was on the cusp of his maiden F1 pole, Sergio Perez says: "I felt like this could be my day."

When Max Verstappen crossed the line to take provisional pole one could have been mistaken for thinking one was at Zandvoort, such was the roar of the crowd.

Moments later however an even bigger roar went out when Sergio Perez crossed the line to claim the top spot on the timesheets.

The Mexican has looked good all weekend, and suddenly there was the prospect not only of his first pole for Red Bull, but his first pole since entering F1 in 2011.

But it was not to be, for Verstappen saved his best till last, while another superb lap saw Lewis Hamilton deny the Mexican the honour of joining his Red Bull teammate on the front row.

"I was just into my own thing," said the Mexican at session end, having finished third.

"I knew there was some time to find so I felt like this could be my day, you know?" he continued. "Unfortunately I didn't put it all together there in the end where it counted.

"It was pretty tense," he admitted, "but I think I knew it was all down to the final chance: how much I was able to find.

"I was on a pretty good lap; I think in Turn 1 itself I was able to find a couple of tenths. I just couldn't keep it up completely throughout the lap and didn't get 100% out of the car today.

"I think Max did a fantastic job," he added, "same as Lewis, so we finished where we deserved today, I think.

"I think we are in a good position," he insisted, even though a COTA Grand Prix has never been won from outside the front row. "I think it's going to be a pretty long race tomorrow so not too concerned about the qualifying; I think there is plenty of opportunities for tomorrow."

The result puts him up where he and his team need him to be, in support of his teammate, while a grid penalty for Valtteri Bottas, leaves Hamilton facing the might of Red Bull alone.

Having often failed to impress in qualifying, the Mexican usually known for his race and tyre strategy as opposed to one lap pace, this weekend Perez has been on the pace from the get-go.

Asked if his performance has given him more confidence, he said: "Not just from today... starting the weekend, it shows how hard we are working behind the scenes to try to get on top of the car together with my engineers.

"We haven't had the year that we were hoping, the adaptation has been longer than expected but we've been working flat out and yes, we can see the progress and yes, I can just expect to keep getting better."