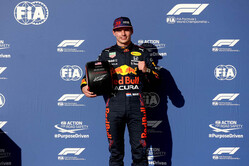 Red Bull driver Max Verstappen claimed pole position on the soft tyre but he will start the race tomorrow on the medium tyre, with which he set his fastest time in Q2. All the drivers used only the soft in Q1, saving the mediums for later.

Including Hamilton, a total of eight drivers got through Q2 on the medium tyre, meaning that this will be the compound on which they start the race tomorrow. Only Ferrari's Carlos Sainz and AlphaTauri's Yuki Tsunoda set their best Q2 times on the soft, starting from fifth (considering a five-position grid penalty for Mercedes driver Valtteri Bottas) and 10th on the grid respectively.

Temperatures remained high today, with qualifying (which started at 4pm local time, two hours later than the race start at 2pm) beginning in 32 degrees centigrade ambient and 36 degrees on track. During the qualifying hour there were some gusts of wind, affecting aerodynamic balance, with gathering rain clouds and slight drizzle in the closing seconds. Possible showers could arrive during the night but the weather is expected to be similar or slightly warmer tomorrow, with the race beginning earlier in the afternoon.

With the high temperatures and high abrasion at COTA, a two-stopper looks optimal tomorrow, especially as the warm weather is expected to remain for the race.

The exact strategy that each driver selects will also obviously depend on the tyres that they have left in their individual allocations, but the fastest way on paper to tackle the 56-lap race involves one stint on the P Zero Red soft or P Zero Yellow medium and two on the P Zero White hard. These two options appear to be very close.

Managing the wear and degradation on the soft tyre is going to be crucial, so those wanting to try a one-stop strategy will only be able to do this using medium and hard, but this appears not to be easy to achieve.

As can be expected at this stage of the season, there are a few drivers starting out of position due to engine change penalties: they might be tempted to fit the hard tyre at the start and run a long first stint to gain track position. However, COTA is a circuit with several overtaking opportunities and a reasonably small pit lane time loss, so the advantage of a one-stop strategy could be slightly less than usual.

Mario Isola: "The medium tyre was favoured by the majority of the top 10 on the grid, as starting on this compound allows more flexibility in terms of strategy. Managing the softs to avoid overheating - especially at the rear - is crucial in these warm conditions, and this makes the medium and the hard the key choices for the race. A two-stop strategy is the more likely, with the high speeds and abrasive surfaces here taking a lot out of the tyres. At the same time the relatively low pit stop time loss and number of overtaking opportunities mitigate the advantages of a one-stopper. There are a number of different two-stoppers that are quite closely matched, depending on the race circumstances, so this looks set to be an intense strategic battle."