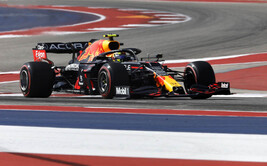 Ahead of today's free practice session the air temperature is 28 degrees C, while the track temperature is 36 degrees. Once again it is bright and sunny.

The warmer conditions this year have left drivers facing a conundrum in terms of tyre strategy, with a number admitting problems, particularly with the rears.

"Managing the soft tyre looks to be key," said Pirelli's Mario Isola yesterday, "and this is something that the teams will be looking at in more detail tomorrow, with some likely to try and get through Q2 on the medium tyre in order to start with it on Sunday and open up a wider range of strategic possibilities for the race.

"However, with a bigger performance gap compared to the soft than we saw in FP1, the soft certainly has its advantages too: especially with a two-stopper looking likely."

Despite the efforts to rid the track of its notorious bumps they remain as big a problem as ever, with some complaining they are worse than ever.

Track limits proved to be an issue yesterday, indeed Lewis Hamilton would have been quickest in the second session but had his time deleted, while traffic was also an issue.

Quickest by almost a second in the opening session, the Mercedes pair lost ground in FP2, leaving Sergio Perez to set the pace.

However, over the course of the two sessions Valtteri Bottas was quickest, ahead of Hamilton and Perez, the three covered by just 0.072s.

Due to said traffic Max Verstappen didn't post a representative time during the qualifying sims, though the Red Bull looks to have good long run pace.

Ferrari and McLaren both look strong, which will keep the battle for 'best of the rest' going, while Alpine and AlphaTauri look capable of scoring points.

Of course, heading into the rest of the weekend, the big question - other than Verstappen's shocking "stupid idiot" comment, is the reliability of the Mercedes engine.

With Bottas, Sebastian Vettel and George Russell all taking grid penalties after taking on new components, it appears to be a question of when, rather than if, Hamilton will follow suit.

Going back to track limits, ahead of today's session Michael Masi has warned drivers not to cut the apex at Turn 6 in the Maggots/Becketts section.

The lights go green but most drivers have yet to climb into their cars. Eventually, Vettel breaks the deadlock. He is on mediums. He is warned of a 15 km/h tailwind out of Turn 1.

As Vettel pits, having failed to post a time, Alonso heads out on softs. The Spaniard subsequently reports that he is "happy" not to use DRS.

As Alonso posts the first time of the day (40.977), Hamilton and Raikkonen head out, both on softs. Vettel, still on mediums, joins them.

The world champion wastes no time and heads straight to the top of the timesheets with a 35.814, That said, Alonso's is the only other time.

Feeling his tyres are still cool, Mazepin reports that he's going to go for a fast cool lap. At which point his previous time is deleted.

A 37.691 sees Schumacher go third as more drivers head out, among them Perez, Norris and the Ferrari pair. Most are on softs, though Gasly is on mediums.

Meanwhile the stewards reveal that Alonso has taken on a whole new engine which means he will start from the back of the grid.

Bottas goes top with a 35.556 as Leclerc goes third and Sainz fifth.

As Hamilton goes quickest in S1, Verstappen finally heads out and Bottas' best time is deleted.

After 25 minutes, Latifi is the only driver yet to emerge, while Vettel, Stroll and Bottas have yet to post times.

Perez improves to 35.208, just 0.001s off his teammate's pace. Like Verstappen he was quickest in the two final sectors.

After clipping the inside kerb, a spin for Bottas in Turn 6 briefly brings out the yellows. "Got really bad flat-spots," he admits.

Christian Horner reveals the Sebastien Buemi has been working in the team's simulator overnight, hence the improvement.

Russell performs a carbon copy of Bottas' spin, albeit at Turn 5 and slightly quicker.

With 28 minutes remaining, Latifi posts a 36.261 to go ninth as Bottas remains the only driver yet to post a time.

Bottas heads out on a brand new set of softs, followed, shortly after, by his teammate.

Alonso finally switches to the softs, a brand new set.

Quickest in the second sector, Bottas crosses the line at 34.988 to go second, 0.076s down on Verstappen.

In the Red Bull garage, Adrian Newey is overseeing some significant work on Verstappen's car. Christian Horner insists that it is a "precautionary check".

Norris improves to third with a 34.945as Leclerc consolidates sixth with a 35.343. However, the Monegasque has his time deleted.

Like Hamilton, Leclerc reports an issue with his rears.

Perez goes quickest in the opening sector. He only manages a PB in S2 before posting another PB in S3. At the line it's 34.701, which puts him top.

As the final qualifying sims get underway, Verstappen heads out on fresh softs.

Meanwhile, Hamilton goes quickest in S2, stopping the clock at 34.458 to go top by 0.243. However, he has time deleted also, albeit for exceeding the limits at Turn 9 as opposed to Turn 19.

Though both had their times deleted, Verstappen's was the quicker.

As was the case yesterday, onboard footage reveals Verstappen struggling with understeer.