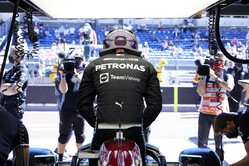 As Valtteri Bottas takes on his sixth ICE of the season, there is growing concern over the reliability of the Mercedes power unit, though Toto Wolff doesn’t appear overly oncerned.

While the Finn is only taking on a new ICE (internal combustion engine) - as did teammate Lewis Hamilton in Turkey - it follows grid penalties at Monza and Sochi for the driver who won last time out in Turkey.

With Sebastian Vettel also facing a penalty after taking on unspecified components and George Russell taking on a new ICE, Turbocharger, MGU-H and exhaust system, there are fears that championship contender, Lewis Hamilton will also face another grid drop in the coming races.

"We've had, unfortunately, since mid-year, some reliability issues that are coming back, Toto Wolff told Sky Sports in the moments after the opening session.

"I think we understand much better what it is," he continued, "but it means there is no durability in them and that means potential DNFs."

Asked if Mercedes is trying "new pieces" in the engines in order that it can "go for gold" with Hamilton, Wolff replied: "No, you need the same specification for everybody, you can't make any difference between one engine or the other."

When it was suggested (by Sky presenter Simon Lazenby) that it was "something to do with air valves, Wolff snapped back: "You are being fed with a lot of bull***!

"We don't need to talk about air valves or anything," he continued, "because you and I wouldn't understand what it is.

"It's not good," he said of Bottas' penalty, "the penalties are less than with the previous one but it is still not nice because it's such a tight, fought battle. Even if you are on pole you're going to have a difficult time to come back."

Asked about the pace advantage in FP1, he said: "We are gaining on the straights, that is really good, but the main gains, if you look at the speed trace with Verstappen is through the fast corners.

"That is clearly encouraging," he added, "because they are running more drag. They need more drag, but we are better in the corners."