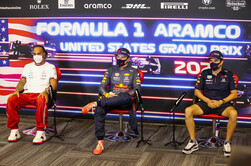 Max, congratulations. Where did you find so much speed throughout the weekend? You've been getting faster and faster and faster.
Max Verstappen: Yeah, it was quite exciting out there, also of course in Q2 trying to make a lap time with the hard compound and then in Q3 my first lap wasn't amazing but then in the final lap it also started spitting, like a bit drizzle, in the last sector especially. I was not sure if I was going to hang onto my lap time but it was enough and of course to put the lap time in and be in pole position but also to be P1 and P3 as a team was a very strong performance.

It's very impressive. So, you've got a huge championship battle coming, front row, you and Lewis. How do you feel about tomorrow?
MV: I guess that's what people like and from here onwards we of course just hope to have a good start and work together as a team to get the best possible result.

Sergio, how does it feel? The fans are so excited here in Austin. How did the run feel for you? How did the fans feel?
Sergio Perez: Yeah, well, we were really close you know. On that final lap I think we did a great job as a team. Unfortunately my final lap wasn't as good throughout the lap. I improved through the first sector quite a bit but I wasn't able to just keep it progressively. I think the rain hit me a bit too hard in the final sector. There were spots of rain and I lost some grip in two corners and I could just see my delta way off.

Lewis, good effort. It looked like the first run in Q3 was a little bit of struggle at the end but the next run was a little bit quicker but you just missed it. Where could you have found a little bit more speed?
Lewis Hamilton: Well, firstly I want to acknowledge the crowd we've got here. We've got a great crowd this weekend. Every time we come to Austin we always have this amazing crowd and fortunately really good weather. We are grateful for it. I gave it everything today. It was a bit of a struggle through qualifying. I think from P1 onwards we kind of fell back a little bit and those guys were incredibly quick through qualifying. I was happy with my last lap. Of course there are always areas where you can improve but I think that was pretty much everything we had. So we will just work as hard as we can tomorrow. It's good positioning for tomorrow so hopefully it will be a good race down to Turn 1.

There is a lot going on in the garage with everything going on technically as well as everything on track with Max, what is your mindset for tomorrow?
LH: The mindset is to win the race and to give these guys the best race they've seen.

Max, how good was the session and also that final lap in particular?
MV: It was a little bit up and down I would say. Just getting to the limit of the car felt a little bit difficult for me this whole weekend so far, to try and get that last bit out of it. Even in qualifying I had to work up to it. Then, on the mediums I actually felt really good. I think in Q2 that was a good lap. It seemed like they suited me a bit more in terms of driving. The first run in Q3 again wasn't perfect. I just couldn't really get the same out of it in terms of feeling compared to Q2. So then I had to dig deep in Q3, run two and then it even started like spitting a bit on your visor in the last sector so it wasn't ideal but yeah, to be on pole is great especially on a weekend so far, like I said, where it was a bit more difficult to find that last bit.

Did that rain at the end cost you anything?
MV: Difficult to say, but it's not nice when it starts spitting on the visor but then of course you are on your quali lap so you're just going to go for it.

And what about the race pace of your car? It's been quite difficult to read from the outside this weekend.
MV: Yeah, I had a bit of traffic as well on my long runs but everything felt quite normal. I do think we also improved the car a little bit today so hopefully that will be better for tomorrow. But I guess we will find out tomorrow, but there were no big problems.

It's much hotter than it was two years ago here in Austin. Does that make the race that much more complicated for you guys?
MV: Well, not for us. It's mainly just tyre wear and tyre deg, which I think we have to look at a bit more closely. Also again, we have a little bit of information but also we'll find out throughout the race how they are holding up.

Max, it looks like we have a hell of a race on our hands tomorrow, your championship rival alongside you on the front row. How much are you looking forward to it?
MV: Like any other race we've had so far this season. I think we have had a lot of good races and good battles already this season. I think we are all just looking forward to another one.

Lewis, it was incredibly tight in the end. Sum up quali for us?
LH: Yeah, it was fun. It was definitely a difficult session. I would say for us since P1 it's been a little bit tougher, we have been making lots of changes to try to improve the car. But it's been a real challenge, and going into qualifying I think the first session wasn't that great. Q1 wasn't spectacular but it started to improve, particularly on the medium tyre, and the last two runs were pretty good. I think they have just been pretty quick all weekend and I think we were able to match them or be ahead in P1 but since then they have really pulled a lot. You can tell that the car is quick because obviously both of them are up there and pulling in some seriously good laps. But we are in a good position to fight them tomorrow and I hope we can.

Do you think you will be more competitive with them in the race than you were in qualifying, just lap for lap.
LH: Time will tell. I have no idea.

And what about tomorrow? You're starting on the inside of the front row. How much grip is there from that grid position?
LH: The last time we started there was... Two years ago I think I was in fifth or something. I don't remember. It was a long time ago in the wet. I think that I started second there. As far as I am aware there is not a huge difference between the two but we will find out tomorrow.

Last one from me. There is a huge atmosphere here, 140,000 fans. How infectious is that support?
LH: It's hugely infectious. This is one of the best races of the year and it's simply because of that city and the crowd we get here. The Americans and the Mexicans that have come over, there is a real crazy buzz as soon as you arrive at the gates of the circuit, and it carries through the whole weekend and I'm excited to see them turn out tomorrow and I hope we can give them a good race.

Checo, coming to you, when you were fastest after the first runs of Q3, we could hear the roar of the crowd, could you hear it from inside the car?
SP: Not really, I was just into my own thing. I knew that there was some time to find so I thought that this could be my day, you know? Unfortunately I didn't put it all together then in the end when it counted. But still, I think we are in a good position. I think it's going to be a pretty long race tomorrow, so not too concerned about the qualifying. I think there are plenty of opportunities for tomorrow.

Checo, you seem a little bit frustrated but do you take confidence from this performance today?
SP: Yeah, definitely. Not just from today, starting the weekend, it shows just how hard we are working behind the scenes, you know, to try to get on top of the car, together with my engineers. We haven't had the year we were hoping. The adaptation has been longer than expected but we've been working flat-out and yeah, we can see the progress and yeah, I can just expect to keep getting better.

And what's the goal in the race tomorrow for you?
SP: To maximise every opportunity. I think there is a long race ahead of us tomorrow and hopefully we can bring a one-two for the team tomorrow.