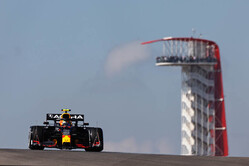 Christian Horner has admitted that the team is perplexed by the cause of the crack to Max Verstappen's rear wing.

In the moments before qualifying, having finished first and third in final practice, there was frantic activity in the Red Bull garage as mechanics worked on the rear wings on both cars.

In the break between the two sessions, engineers had detected a hairline crack on the rear wing on Verstappen's car and opted to strengthen the wing and that on his teammate's car.

However, what caused the crack is unclear.

"I don't know whether Max hit something as it was quite a crack," he admitted. "And nothing on the other car or any of the other wings.

"We got permission just to beef it up a bit on both cars," he confirmed. "We'll have a closer look at it tonight."

The damage comes at a time Mercedes has admitted that it was forced to compromise performance in order to avoid its cars being "massacred" on the circuit's infamous bumps.

"The car was bottoming out quite heavy, and that breaks the car," revealed Toto Wolff. "So we took some mitigating steps to not break it, or massacre it that hard, in order to survive the race.

"Definitely a compromise for going faster on the track," he added, "but maybe a necessity to actually finish."

"You can see confidence has just grown and grown so that was a big factor, particularly on the mediums," he said. "We were debating at one point, would the medium be the better tyre for Q3.

"It was a great qualifying performance from both our drivers, a first and third, it's a great place to be starting tomorrow's race," he grinned. "It's the first non-Mercedes pole here in the hybrid era and the first time we've had two cars against one, so another milestone for us."

Looking ahead to the race, he said: "It's tough to follow here and you definitely want to lead into turn one, so at least we've got two guys starting at the front of the field. It's going to be an interesting first corner tomorrow."