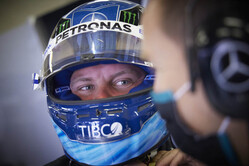 Admitting that George Russell is being considered for 2022, Mercedes boss, Toto Wolff drops broadest hint yet that Valtteri Bottas could be moving on.

Though Lewis Hamilton has agreed a new two-year deal with Mercedes, the identity of his teammate in 2022 (and beyond) is yet to be confirmed.

While Valtteri Bottas, who joined the team in 2017 following the shock retirement of Nico Roberg, has been retained on a series of one-year deals, there is growing speculation that the German team needs to try something new.

Though Hamilton has made no secret of his desire to retain Bottas, George Russell well and truly staked his claim in his one-off outing for the German team while replacing the seven-time world champion in Bahrain last year.

Though Bottas has proven to be an ideal "wing man", other than his lack of consistency, many seek him merely as a foil for Hamilton - in the Rubens Barrichello mode - as opposed to a challenge, far less a threat.

Speaking in the wake of Sunday's race, when Bottas once again followed team orders to the letter, Wolff dropped the broadest hint yet that it may be time to freshen-up the team's line-up when he admitted that should the team opt for Russell it would be his responsibility to help Bottas seek a decent alternative seat.

"If we were to come to the situation that we wanted to give somebody else a go, then it's not only my relationship with him but also my responsibility that he has a great future," said the Austrian, "because he deserves that.

"He has been the team mate of the best Formula 1 driver of all time and that is not always very easy to shine, but he's fantastic," he added.

"Valtteri has ticked all the boxes that we needed to understand," said Wolff, when asked if Bottas might yet be able to convince Mercedes to retain him, "not only recently but also before.

"It is more of a strategic decision whether we stay with the current line-up or whether we go more bold next year," he added.

"But we're going to sit down with the drivers, with both of them, because George is a Mercedes driver, and then discuss and then come up with a decision.

"Lewis is okay with both scenarios," he added, according to F1i.com, "and understands the pros and cons that speak for Valtteri and George. Lewis has never tried to influence the decision and he has no preference as to who should be in the car.

"He likes the relationship with Valtteri, and we know it too," he continued. "But he never said that he would like this or that best."

Wolff has previously said that the decision will be made over the summer break, ahead of the Belgian Grand Prix.

Over the last 24-hours there has been speculation linking Bottas with Alfa Romeo, while previously it was claimed that he might return to Williams, though whether either option might be considered a "great future" for the Finn surely only he could say.