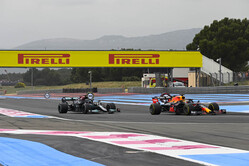 Red Bull's Max Verstappen won the French Grand Prix thanks to an unusual two-stop strategy, going from P Zero Yellow medium to P Zero White hard to medium again. Verstappen was the only frontrunner to stop twice today, taking the lead again just a lap before the chequered flag.

Mercedes driver Lewis Hamilton claimed the lead after the first corner but when Verstappen made his second stop, he elected to stay out on a one-stop medium-hard strategy: the tactics used by the majority of the field. The only other two-stopper was Ferrari's Charles Leclerc, classified 16th.

The majority of the drivers, including of course the entire top 10 on the grid, chose to start on the medium tyre. Both Aston Martin drivers as well as both Alfa Romeo drivers, plus Alpine's Esteban Ocon and Haas driver Nikita Mazepin were the only drivers to start on the hard tyre, with nobody using the soft during the race.

With the top eight finishers all having started on the medium tyre, Aston Martin's Sebastian Vettel was the highest placed driver to run an alternative starting strategy. He ran a 37-lap stint opening stint on the hard tyre, before switching to the medium and eventually finishing ninth ahead of his team mate, on the same run plan.

Temperatures were considerably cooler than they had been over the previous couple of days, with rain on Sunday morning that dried out in time for the race but washed the surface clean of residual rubber. While ambient temperatures remained around 27 degrees centigrade, track temperature was down to about 37 degrees: nearly 15 degrees cooler than free practice and qualifying.

Mario Isola: "This race turned into an intense and exciting strategic battle, with a number of unknown factors such as cooler track temperatures, rain this morning that reset the track, and wind that continued to catch a few drivers out, all playing a part. These aspects contributed as well to increased front-left graining, which was key today. As a result, although a one-stopper was expected, there was also possibility of a two-stopper, which Red Bull and Max Verstappen went for decisively. The margins were very finely balanced, as everyone could see, between a two-stopper and a one-stopper, and it took a lot of commitment to make either strategy work. Congratulations to Max Verstappen and Red Bull for a strategic masterclass today, which kept everyone guessing right up to the final lap."