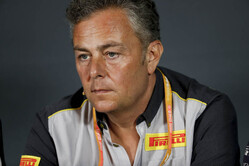 Q: Gentlemen, your memories of the French Grand Prix. Laurent, perhaps we can start with you? Home race for you.
Laurent Mekies: Oh, it's a long way back, Tom, but it's actually a very special memory, as it's the first race my parents took me to, probably back in 1988, as a small boy. So it was for me the beginning of a big, big passion and I have been very lucky as it eventually also turned into a job. We are very glad that we have spectators here today as it means that hopefully very many little boys and girls will also discover Formula 1 this weekend and become hardcore fans as we all are.

Q: Mario, please?
Mario Isola: My first time was in 2001 but I have a lot of memories from 2003 and 2004 because I was involved in the Maserati MC12 project and this circuit was one of the test tracks mainly used by Maserati. I spent here, I don't remember, probably 100 days per year, something like that so it was really an old memory but a good memory.

Q: Mario, can we stay with you. It has been a busy time for Pirelli since Baku. Can you talk us through the investigation that has taken place since the race and the conclusions you reached?
MI: Yeah. It was a busy time because we obviously had to react quickly to understand what happened to the two tyres. We sent them back immediately to Milan and we started the analysis, not only on the two that failed but also on several other tyres used during the race. At the beginning we had the idea that it was debris because we found some other left rear tyres with cuts but then we discovered that the failure mode was a circumferential cut on the internal sidewall that is due to what we call standing waves. Standing waves are connected to running conditions. Now, running conditions are a mix of running pressure, camber, load, speed and because these running conditions were above our expectations we had the failure of the two tyres.

Q: Can you tell us now about the new operational procedures that are in place at Paul Ricard this weekend?
MI: Yeah, obviously after the investigation was concluded we sent our report to the FIA. As you probably know, we don't have the possibility to monitor and police the running pressures and the running conditions simply because we don't have a standard sensor at the moment. This will be implemented in 2022 but at the moment it is a sensor that is coming from teams, so we have to rely on measurements that the FIA can do directly. When we spoke to the FIA and explained the conclusion of our investigation they decided to implement the technical directive, with new checks and controls, that are obviously not replacing the policing of the running pressure but are checking more carefully in a way that is much more strict, that the running parameters are followed. We make some assumptions on running parameters and it is important that the tyres are operated within these assumptions, as any other part of the car. That's why with this new technical directive, or upgraded technical directive, we are happy with the result and that the FIA is carrying on additional controls.

Q: Laurent, what do these new checks and controls mean for you the teams?
LM: For a team the new technical directive should not change anything. At the end of the day, the technical directive does not change the way we operate the tyres. It does not change the running parameters of the tyres. What it does is it adds a number of checks to ensure that you are actually respecting the prescriptions of the FIA and of Pirelli that were already there before. So if you were respecting them before it does not change anything to the way you operate the car here, it's just that the FIA has a lot more checks to ensure that you are actually sticking to the parameters that were already in the regulations.

Q: Thank you. Mario, different compounds here this weekend. How will that impact?
MI: We have the same compounds that we brought to Paul Ricard in 2019. This is a different circuit. We have also some parts of the track with different tarmac. In terms of roughness it is not very different compared with 2019, but looking at Free Practice 1 the level of grip is slightly lower. I don't know, we will ask Laurent also! But I'm not expecting anything particular in terms of strategy or output from these tyres - C2, C3. C4. They are from the middle of the range. They are well suited to the characteristics of the circuit. I am expecting a one-stop race. Going softer was not the right approach because on this circuit, in these conditions and with the weather expected, which can be very hot in this period of the year, the C5 is not the right compound for Paul Ricard. So we decided to stay on the previous allocation - C2, C3, C4.

Q: Laurent come back to you, can we just talk in general terms about Ferrari performance? What chance a third pole position in a row this weekend?
LM: These are very slim, Tom. We will not be hunting for three in a row. But joking aside, we know our cars have been performing very well in slow speed corners so far. We know it's been a little bit more difficult in medium speed and high-speed corners. It's no secret that here the track's a lot more about these medium and high speed corners so we don't expect to be battling with the two top teams. We will be in the midfield. It will be a strong midfield. We'll try to understand if we have improved in these weaknesses that we had since the beginning so even though car development has been less this year obviously because of the focus on 2022, there are still means for us to try to unlock some potential, try to understand why we were more limited in these medium and high speed corners and this is for us a very good challenge to be faced with, to see if we've actually made progress there.

Q: It's a very close battle between yourselves and McLaren in the constructors' championship; you're two points ahead at the moment. Lando Norris said yesterday something quite interesting: he said Ferrari makes more mistakes than McLaren in the races. I would just like to get your reaction to that.
LM: It's a very tight fight with McLaren. As you say, two points apart after six races I think they have beaten us in the first three races. We have been in front of them in the last three races so it's extremely tight. It's true to say that our qualifying pace has been globally better than our race pace and therefore we have been too often having to sit back in the race, because we were not having quite the same edge that we've been able to have in qualifying. We are working on that. We are working on this race pace performance. We are working of course also on trying to do as little number of mistakes as possible, as I'm sure Lando and McLaren are also trying to.

Q: (Luke Smith - Autosport) Laurent, Andreas Seidl spoke this morning and he said he thought there'd been a lack of transparency in the response to what was the exact cause of the tyre failures. He said that unfair assumptions maybe had been made about Pirelli, he said he wouldn't support criticism against them. I just wanted to know, from a Ferrari standpoint, where do you guys stand on it? Are you happy with what's come out or do you think there are still more answers needed?
LM: I think tyres are not different to engines, wings, suspensions, just to respect the parameters they are designed to work in with so we have a very clear set of parameters that we need to respect on the tyres, they could be pressure, temperatures, camber, whatever. We understand that from the analysis of Pirelli and the FIA, these parameters do not change and as I explained earlier, it's effectively introduced a number of additional checks to make sure that we respect these parameters so for us it's going to be transparent and you know, I would say that on top of the regulatory considerations, it's our responsibility as a team that we send out our drivers in the most safe conditions and therefore we were obviously taking these parameters very seriously already.

Q: (Dieter Rencken - Racing Lines) To Laurent, but if Mario would like to comment as well, please feel free to do so. Laurent, when we have a look at it, yes, you're correct in saying that you have all sorts of parameters for engines etc, but that isn't really the subject of that a technical directive which runs to 12 pages. We've also had technical direction on the flexi-wings, for example. Is Formula 1 becoming too over-regulated? I've got a copy of the 1963 tech regs and they run to four pages...
LM: I think it's going to be difficult to come back to the four pages, Dieter, but you know, allow me to stress that the technical directives, as lengthy as it is, does not change the regulations. It's only there to make sure the FIA has the means to enforce what was already written. So, it's like having ten policemen in the garage, if you see what I mean, and if we need to go there to make sure we have a safe spot on the first four (sic), then fair enough. I don't think it adds complexity, I think it's about enforcing what's already there.

MI: As Laurent said, it's important that we have a regulation this protecting everybody and it is clear that we cannot come back to a four pages regulation when we are working in an environment where we have the best engineers and cars are very complicated, rules are very complicated sometimes. The most difficult part is to explain to spectators what is going to happen. We have to find a compromise but it's impossible to think that we go back to 50 years ago.