Stoll to step down as head of Renault Sport Racing 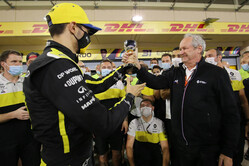 Jerome Stoll, President of Renault Sport Racing since 2016 and the return of Renault as a full factory team, will step down at the end of his term on 31 December.

When Renault decided to return to Formula in late 2015, the target was clearly defined: rebuild a structure, put it on the right track and reach the highest level of the sport to compete for the world championship.

Over the past five years, a reinforced and stabilised organisation has been deployed. Human, technical and financial resources matching the ambitions have been put in place and the progress of Renault F1 has been clear.

With a record points tally in 2020, three podium finishes and an average of twice as many points per GP as last season, Renault enjoyed its best season ever as it continued to improve and position itself as a credible challenger for the future.

During this five-year period, many changes have also been introduced: new technical regulations, budget cap introduction and the new Concorde agreements.

Renault Sport Racing has also won in Formula E with three constructors' titles with Renault e.dams and a drivers' title with Sébastien Buemi before handing over to Nissan while maintaining the powertrain development activities. Lastly, customer racing activities have developed to remain a reference in the domain.

"These five years as President of Renault Sport Racing have been very intense," said Stoll. "Taking up the challenge of rebuilding a Formula 1 team is tough, it takes time, commitment and unfailing determination. A first step has been taken with a team and drivers that we can now see on the podium. I appreciate the privilege of being able to be part of all these changes and all our progress.

"Motorsport, and even more so Formula 1, is above all a human adventure, encounters, bonds that are forged, joys, disappointments and invaluable rewards. The Formula E titles and seeing young drivers racing in our cars in the Eurocup or Clio Cup are an integral part of what has been a wonderful experience. I owe a lot to every collaborator in this company. They are committed and determined to give their best to make our brand and our values shine. A new chapter is now opening with Alpine and I am sure the best is yet to come. I am happy and proud to have been part of this great adventure with such great people."

"Jerome's connection to the company and his conviction that motorsport is part of the brand's DNA contributed to Renault's return to Formula 1 as a complete team," added Luca de Meo. "His experience and expertise, acquired during his career at Renault, have been key assets in the structuring and progression of our F1 team. For all this work accomplished over the last five years, thank you Jerome."

"What a long way we have come together from the start of the project in June 2015 to this season's podiums," said Cyril Abiteboul. "Jerome's passion for competition as well as his loyalty to the women and men of the team have been of invaluable help over the years. His support as well as his strategic vision have enabled us to overcome many hurdles and advance our ideas in an increasingly complex environment. Today, a new adventure begins with Alpine and the F1 team will be a major asset for the development of the brand. Thank you Jerome for your trust, your advice and your loyalty."