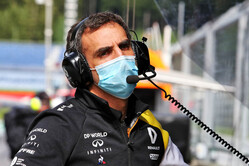 Cyril, perhaps we could start with you. How come you're not able to join us here inside the paddock?
Cyril Abiteboul: I guess... well, first I'm not very far because I'm just sitting outside the paddock in a room. I guess maybe a sign of these times and of this year, I arrived a bit late so I have to go through the process of waiting for some results to come to be able to join my comrades for the last race of the season.

But I'm sure you kept up to speed with what was going on during FP1. Could you just confirm for us what the problem for Daniel was please?
CA: My understanding - and I was not in the garage - is that it's a fuel pump, so not related to the power unit even if obviously it cut fuel flow - so no damage to the power unit that was anyway going to be changed for FP2 or for tomorrow. So I'm still waiting to hear back from that. It's unfortunately a problem that happened before but a problem that should have no further impact for the remainder of the weekend.

And while we're talking Daniel Ricciardo, this is of course, his last weekend with the team. Can you sum-up what he's given you and what you'll miss about him?
CA: Well, he's given a lot. What he's given first and foremost as a driver, he's been remarkable, in particular this year. I think there is no doubt about the progression of the team this year. It's very much a credit to Daniel who's been clearly leading the charge of the team and behind him a group of people and a group of mechanics and engineers who are doing a remarkable job on track. Off-track, obviously we know Daniel is a great ambassador, is a team leader. He has clearly been instrumental to the changes that we've done last year when we had altogether a disappointing season. So, I'll say that frankly when he joined we knew that it would take a bit of time, that he was not coming into a turnkey organisation. I think I remember those exact words said to Daniel back in the first meeting back in 2018. It was not a turnkey organisation but he made an impact and we are so different today to what we were two years and a half ago when we decided to form this partnership. So, in that respect, frankly, it has delivered. It has delivered positively and the irony in all of this is that I believe we are a much stronger team now and he will have to race a much stronger team next year and obviously all of that we will be missing but y'know, we're also glad to see him in a great team and we look forward to an exciting battle against McLaren and Daniel next year.

Zak and Otmar, a great battle for P3 in the Constructors' Championship is going to be settled this weekend. Zak, perhaps we could start with you. McLaren ten points behind Racing Point. How confident are you of overturning that deficit?
Zak Brown: I think it's going to be very tough. I think they've had a faster car all year. The points swings in the last few races have been quite big but I think on outright pace it will be difficult. I think all the men and women at McLaren this year have done a fantastic job of designing and building and manufacturing a competitive race car and I think our goal coming into the year was to just take a step forward on performance from last season. I think we've done that - and whether that ends up third, fourth or fifth in the Championship - Renault's very close and and also very competitive - we'll see what happens this weekend, but regardless of the final Constructors' Championship, I think the team's done an outstanding job and all credit to them for another step forward in our journey to try to get back to the front of the field.

Otmar, if I could throw this question to you as well, what would it mean for Racing Point to finish P3?
Otmar Szafnauer: Well, it's not going to be easy. I think Zak is absolutely right, we've had great points swings in the last two races and that could very well happen here. We just have to keep our heads down and do a good job this weekend, make sure we have a normal race weekend and we'll see where we finish. It would be a tremendous accomplishment if we could finish P3 but by no means will it be easy. It will be tough.

And Otmar. If I could just throw it back to last weekend. You've had a long career in Formula 1. Was that one-three at Sakhir your greatest moment so far?
OS: I think so. Second race win, first time ever of a double podium. Absolutely. For some teams it's a regular occurrence, for ours it isn't, so when it does happen, for sure it's a great moment.

Zak, just coming back to you, Carlos' last race with McLaren. How would you sum-up his contribution over these past couple of years?
ZB: Carlos has done an outstanding job I think. We would never have signed him if we didn't think he was an excellent grand prix driver. I think it's fair to say he exceeded our expectations. I think he really came into his own in our environment. He's done an outstanding job and he and Lando have helped lead the way these last couple of years - but as you know, in a racing team, your drivers are the superstars, they've been big contributors, so have everyone at McLaren to give them a good, reliable race car. Renault's been a good partner, so it's all really coming together and Carlos and Lando have made the most of the opportunity.

(Edd Straw - The Race) Question for Cyril please. Obviously there's been a of talk about Alonso driving in the test but setting that discussion aside, how much benefit do you think he'll get from a day in the car. I guess he'll - as well as learning more about the car itself, he'll be working with what will largely be his car crew for next season, so quite a useful exercise in gathering information for him and also you about him.
CA: Yeah, absolutely - and I appreciate there has been lots of buzz around that. We started the year with some controversy, we finish the year with another type of controversy but it's good. It keeps the sport alive also. It's very much a human thing that we're doing for Fernando. When we decided with Fernando and Fernando also decided to come back to Formula 1, he's been very clear that he wanted to have as much mileage as possible under his belt before next year. As you know, the regulation put a clear limit to that, so we've done quite a lot, four days with a two years old car and also we thought it would be a nice thing to be able to do that with a current car. We asked, frankly, and the FIA approve it, as simple as that. And that will be an opportunity for him to so see the evolution in two years because a two-years old car we've also spec'd a detuned engine, with tyres that are demo tyres, that are not really representative. It's good - but that will be much more representative of what we expect next year. So, y'know, the car will be changing more than people tend to report for next year with a small change to the aerodynamics which is something that we can't test next week. So, that will be the same for everyone. Now but for the rest it's about him getting into the team, understanding our process, our procedures, the steering wheels and also getting familiar with his engineers and I understand that the dynamic is already very, very good, very, very strong to have as much as possible a good start next year. Bearing in mind we have only three days of Winter Test in February or March.

(Dieter Rencken - Racing Lines) To all three of the representatives please. Red Bull and AlphaTauri have got a very close cooperation through their Technologies department. Mercedes and Racing Point are increasingly forging a closer relationship and now Ferrari and Haas are entering into some form of technical partnership whereby the cars will be designed and developed in Maranello in a separate office. Is this the right way forward for Formula 1? And then, specifically to Zak and Cyril, is it a matter of 'to beat them, you've got to join them'?
ZB: There's obviously seen a lot on this topic this year. I think we've seen, at the extreme, what it's capable of producing. I think we feel strongly that it's a Constructors' Championship: you need to design, build, manufacture your own race car. That's what all the men and women at McLaren do. I think McLaren continues to monitor the situation and we need to kind of rely on them to define what those boundaries are. It's clearly a competitive advantage for the teams that are passing along that information or those parts, both financially, sporting and politically, and at the same time the teams that are on the receiving end are able to short-cut and inherit the work of others. As you say, there's many teams doing it now. We'll just have to monitor the situation. I think the FIA has stated that their intent is everyone should be their own independent entity. So that's how McLaren wants to go racing, will continue to go racing. But hey, this is Formula 1. It's tough and so you've got to beat everyone within what the rules are.