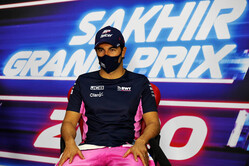 Sergio Perez, welcome to the middle step of the podium, welcome to your first victory. Take us through your emotions right now, the first Mexican to do so since 1970.
Sergio Perez: I'm a bit speechless. I hope I'm not dreaming, because I've dreamed for so many years of being in this moment. Ten years it took me. Incredible, I mean... I don't know what to say. After the first lap the race was again gone, same as last weekend. But it was all about not giving up, recovering and going for it, just making the best we possibly could. This season, the luck hasn't been with us this year but we finally got it and I think we won today on merit. Yeah, the Mercs had some issues but in the end my pace was strong enough to hold George who did a fantastic race today.

That first incident on the first lap in Turn 4 with Charles Leclerc. Explain the emotions right there, because after that the comeback was spectacular.
SP: Yeah, I did a big mistake during the safety car, I locked up my front left tyre badly, so during my first stint I had so much vibrations throughout the stint, but as soon as I recovered onto the second stint... I told my team, you know, this car feels like a limousine, so easy without the vibrations, we had tremendous pace. I think we read the race pretty well throughout the weekend. We came here thinking it would be a two-stop but straight after my long run on Friday we knew what we had to do today.

Now, for people who are tuning into Formula 1 for the first time, amazingly you don't have a drive for next year, as we speak. How much does this strengthen your resolve that you deserve your place in Formula 1?
SP: Ah, it just makes me a bit more peaceful with myself to be honest. What happens is not so much in my hands at the moment. But I know and I want to keep going, but if I'm not on the grid next year I will be back in '22.

Lance, well your second podium this year. A fantastic result for the Racing Point team. How do you feel first of all, your team-mate getting the victory, talk us through your race?
Lance Stroll: Yeah, amazing race for the team. A part of me is a little bit disappointed as I think I could have won the race. I went a little bit deep on my pit exit after my pit stop and Esteban managed to get by me and then I just didn't have the pace. I locked up, Sergio went by, but I just didn't really have the pace to overtake Esteban so I got held up there a little bit. But all in very happy for the team, it's an unbelievable result and first and third is exactly what we needed for the championship.

You mentioned a mistake into Turn 4, there was an under-rotation, you went a little bit wide. What was it that was particularly challenging in that corner on that lap?
LS: It was just being in the fight with Esteban and Sergio. I was late on the DRS out of 3 and Sergio got a good run on me and then I was defending and I just miscalculated and braked a little bit late and locked up. One of those things. But I'm super happy for Sergio. He's got a couple of races left for the team and he's been up there such a long time waiting for the win and it came this weekend so really happy for him.

Esteban, your first podium in Formula 1!
Esteban Ocon: I have no words. I cried on the line, that's how much emotion is going through my mind actually now. It's been a tough season on our side. It hasn't paid off all the time but we never stopped pushing. We kept working hard, we kept staying motivated. That was very important. At the moment where less and less people are believing in you, it's important to believe in yourself and today we made it happen and I'm very pleased with it. It's hard work but it has paid off.

You talk about whether people are believing in you. The momentum seemed to have been with Daniel, he got that podium earlier in the season, so how important is this for you, to have shown your team ahead of having a pretty handy team-mate joining you next year in Fernando Alonso?
EO: Sure. I mean Daniel is a fantastic benchmark. He has done a fantastic season in his second season with Renault. He has stepped up. Overall, I feel like my progression has been strong as well. I am closing the gap to him and to have that podium is the cherry, the fruit on the cake.

Sergio, what an unbelievable race - and after the disappointment of last weekend as well. You've had a couple of minutes for this to sink in now, just describe how you are feeling?
SP: I am a bit shocked, to be honest. I don't find the words. I'm a bit in the limbo right now. As a driver you dream for this time, to be in this position, for so many years. I worked my whole life for a moment like this. To finally achieve it... It's difficult to digest. I think it will take a couple of days, but it's just something incredible, especially coming back from last weekend where it was a very disappointing day for us where we should have been on the podium. Really the last four races we should have been on the podium. But we didn't give up, especially after lap one, we got knocked out again, you know. I don't know what happened. I was already doing the corner and I got hit badly behind. I thought the race was over again, but we managed to come back.

How was the car after that incident on lap one?
SP: I guess it must be good, because we had tremendous pace! The car performed really well. The strategy: I think after Friday we knew already what we were doing. We understood really right the track after the first couple of runs. We knew this Bahrain is very different - the layout, the way your work the tyres - so we knew that we were going for the one stop and that made a strong difference today.

You were fifth on the grid today, what were your expectations going into the race?
SP: Podium. I was going for the podium. But on that you really rely on what happens to the Mercedes and the Red Bulls. But yeah, I was really hoping for a podium, I was determined to get one. I got a good launch, a good start and thought I had a good lap one. I was up to second or something like that.

Esteban, coming to you, your first podium in Formula 1. Now, you've had an incredible journey to get to this point. Can you just describe what it means to you and your family?
EO: They must be unbelievably happy, I hope. I didn't have the chance, obviously, to call them yet but as soon as we are done with everything, I will be spending a good time with them. What a journey. What a difficult journey to arrive here - a lot of sacrifices from my early days. Not easy to get into F1 and I stopped, obviously, last year. Not easy to get back in as well. New team, strong team-mate against me and we were seeing the progress this year. It was coming but it never really paid off until today. Today we made it happen. Very pleased. I think this is what was waiting around but we didn't get the luck we wanted each time. Such a cool race - and congratulations to Checo and also to Lance, my mate, we had a good fight together through Turn Four. It was good fun, I really enjoyed that race. All the emotions that came when I crossed that line. Unbelievable. I never cried for anything but I tell you, today, the tears, they came, and they came for a good reason. So I'm really happy.

It came because it's your first podium in Formula 1. When was your last podium in motorsport?
EO: Too long ago! My last podium must have been Abu Dhabi GP3 back in 2015. So the new Formula 3, obviously. Since then, I was waiting for more moments like this. Today, it's right here. What a moment, thank you very much.

And Esteban, same question to you about your expectations coming into the race from P11 on the grid.
EO: Yeah, we had good expectations about today. Obviously we knew what we are going to do with the strategy, coming from outside the top ten, free choice of tyres and that was very interesting for a race like this. The graphs were showing that we were going to be coming in the top five, that it was going to be a very strong comeback and the guys on more stops were going to be struggling a bit. But yeah, we never thought, obviously, that we were going to come this close to the win even. It's been an awesome race.