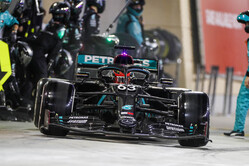 On a day of fairy-tale endings, the sport appeared to be heading for a different result as George Russell and teammate Valtteri Bottas were seemingly cruising to victory.

However, when the Safety Car was deployed after Jack Aitken - Russell's replacement at Williams this weekend - spun in the final corner, depositing his front wing on the track in the process, Mercedes opted to bring in its two drivers and double-stack them.

While previous double-stacks have worked seamlessly, today's was a disaster, as Russell was given the tyres allotted for teammate Bottas and headed out with mixed compounds on his car, while the Finn had to head back out on the same set of tyres he had originally pitted with.

As the stewards investigate the incident, Toto Wolff admits that it was down to a radio failure and not human error.

"Overall for us it was a colossal f*** up," the Austrian told Sky Sports. "I know I'm not allowed to say that, but it was.

"Simply one of the tyre crews didn't hear the call," he continued, "we had a radio failure in the garage and when the car came in they didn't know we had the wrong tyres and this is why we exited with the wrong tyres."

Admitting that the team could have simply left both drivers out on their hards, he said: "It was a safety stop. We were fine on the Hards and we could have stayed out but we had the gap and you do these things. You can question it but I think it's absolutely the right call."

In the subsequent press conference, he expanded on what precisely had gone wrong.

"What happened is that when we call the pit crews out, they get a call on the radios and bring the right tyres out. One side of the garage, George's side, didn't hear the pit call. We had a radio that didn't function, and then the wrong guys with the wrong tyres came out.

"We knew immediately when Valtteri didn't have his tyres, we knew that Valtteri's tyres were on George's car," he added. "We fitted Valtteri's old hard tyre that we just took off to the car again, and we knew we needed to pit George again."

Despite that particular "f*** up", Russell worked his way back up to second and was chasing down race-winner Sergio Perez down when he suffered a slow puncture.

"The puncture probably came from him having to run off the line so many times in order to overtake," Wolff admitted.

"As for the race win? I don't know. I think our planner said he would catch up to Sergio and maybe DRS would have helped us, but I'm not sure.

"Sergio drove a brilliant, brilliant race, and deserves the race win because we made too many mistakes, and were unlucky with the puncture."

"It was very emotional," Wolff admitted, "because you are in your first race with Mercedes and you should have won it actually, driving a monumental race and there's not a lot you can say.

"It's not going to be his last attempt to win a race, it's just the beginning of a fairy-tale. It didn't work out today but I would say a new star is born."