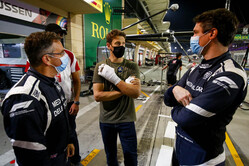 Though he never got the opportunity to race one of its cars, Romain Grosjean could yet get to drive one of the all-conquering Mercedes.

As the Frenchman confirms that he will not be able to compete in the season finale, Toto Wolff has said he is willing to give him a private outing.

"If we are allowed to do this, and nobody within his universe of teams that he raced would provide him with such an opportunity, we would do it," said the Austrian.

Prior to joining Haas in 2016 for its maiden season, Grosjean spent four seasons with Lotus which was subsequently to morph into Renault, though it used Mercedes engines in 2015.

Grosjean got to sit in his Haas on Saturday, subsequently posting a picture on social media.

"Not my usual racing gloves on," he wrote. "Sitting back in my Haas felt really good. I was so happy."

This morning, hours ahead of the penultimate race of the season, Haas announced that despite his best efforts Grosjean would not race in next weekend's season finale and will be replaced, once again, by Pietro Fittipaldi.