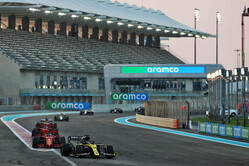 A thrilling final lap saw the team add more points to their haul from the race with Daniel taking the Fastest Lap - a bonus point - and Esteban passing Lance Stroll for ninth place with a fantastic move at Turn 11.

Esteban started from tenth on Mediums with Daniel on Hards a position behind. Esteban gained a place on lap one while Daniel held his original starting spot. An early VSC, which was upgraded to a full Safety Car, led to Esteban pitting for Hard tyres with a superb stop from the crew allowing him to jump Daniil Kvyat. Daniel remained out on Hard tyres to occupy fifth place.

With Esteban making gains towards the top ten, Daniel extended his stint to find a pit window inside the points. That gap opened up with Daniel pitting on lap 40 for Mediums to slot into seventh place. He held that place to the flag, bagging the Fastest Lap with a stellar effort on his final lap in Renault DP World F1 Team colours. Esteban then improved from tenth to ninth with his overtake on Stroll to cross the line with two points.

Daniel Ricciardo: "Considering we started eleventh I'm really satisfied with seventh position tonight. My stint on the Hard tyres at the beginning was really strong and the car felt good the whole time. The Safety Car changed things slightly, but we couldn't progress fast enough to catch the cars ahead. I know we didn't manage to finish third in the Constructors' Championship but, overall, it's been a strong season for the team and compared to last year it's a great step forward. My last lap in the car was the fastest on track and I was pushing hard for that. Very nice! Merci beaucoup to the team for an awesome two years!"

Esteban Ocon: "It was a challenging race for us today, but I was happy with how it ended with the last lap overtake on Lance [Stroll]. We fought to the end and we can be pleased with that. We have some things to review, it wasn't an easy first stint and we got stuck behind some cars. Towards the end, though, the car came alive and that was very fun. I think today's race actually tells the story about our year: we didn't start so great, but we ended it very well! We know the areas we can improve. A big thanks to everyone at the team and at the factories in Enstone and Viry for their hard work this season and also thanks for Daniel as my team-mate this year. I wish him the best for his next journey."

Cyril Abiteboul, Team Principal: "Despite being strong, today's race could not overturn an adverse championship situation and a poor qualifying yesterday. We were quick in practice and picked up the fastest lap in the race, but today's overall performance is probably the best we could do given our starting positions. We managed to make a reverse strategy work with Daniel. He drove brilliantly in his first stint on Hards, going long and then waiting to see if a safety car could occur. It didn't happen but he ended up gaining four positions and the fastest lap, more than any other driver. Esteban had a more conventional race and struggled a bit with the Mediums, but he made us very proud by overtaking Stroll on the last lap. That fighting spirit, in which we gained three points in one lap, is what I want to take away from the weekend, and on which we should continue to build the team. Despite today's effort, we finish P5, which is disappointing given where we were only a few races ago, but there are solid foundations to build on. We have a number of details in the execution that need to be improved ahead of next year, while the overall car performance needs to make another step like the one we have done this year. For now the race team will take a very well deserved break after Tuesday's test, and I would like to thank them a lot for the discipline and the commitment they have shown dealing with the guidelines, which often meant some personal sacrifices. Hopefully next year will be a step closer to normality. Congratulations also to McLaren. They were P9 when we started our journey together. They finish P3. We are proud of having directly contributed to their rebirth."