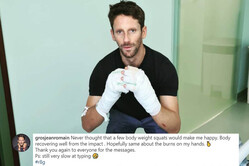 Now that the smoke has cleared, literally, and we can all breathe a huge sigh of relief following Sunday's horror, Romain Grosjean can allow himself a smile as he raises his "Mickey Mouse" hands.

Though it has been officially claimed that it took the Frenchman 28 seconds to extricate himself from his car, for us watching it seemed much, much longer.

Already targeting a return to the cockpit for the season in Abu Dhabi, Grosjean has talked about the aftermath of his accident to French broadcaster TF1.

"I don't know if the word miracle exists or if it can be used," he said, "but in any case I would say it wasn't my time.

"It felt much longer than 28 seconds," he continued. "I see my visor turning all orange, I see the flames on the left side of the car...

"I thought about a lot of things, including Niki Lauda, and I thought that it wasn't possible to end up like that, not now. I couldn't finish my story in Formula 1 like that.

"And then, for my children, I told myself that I had to get out," he continued. "I put my hands in the fire, so I clearly felt it burning on the chassis. I got out, then I felt someone pulling on the suit, so I knew I was out."

An unashamed family man, Grosjean smiled as he told of his 5-year-old son, Simon who is convinced his father has magical powers.

"These are very strong words from the children," said the Frenchman. "My eldest, Sacha, who is seven-years-old, is more rational, he tries to understand. "And my little one has drawn a picture, 'for daddy's sores on his hands'.

"I was more afraid for my family and friends," he admits, "obviously my children who are my greatest source of pride and energy, than for myself in the end.

"I think there's going to be some psychological work to be done, because I really saw death coming.

"Even in Hollywood, we're not able to do images like that. It's the biggest crash I've ever seen in my life. The car catching fire, exploding, and the battery that burst into flames too, so it added a lot of energy to the impact.

"I would say that there is a feeling of being happy to be alive, of seeing things differently," he smiled. "But also there is the need to get back in the car, if possible in Abu Dhabi, to finish my story with Formula One in a different way.

"It was almost like a second birth. To come out of the flames that day is something that will mark my life forever. I have a lot of people who have shown me love and it has touched me a lot, and at times I get a bit teary-eyed."