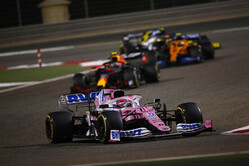 Though broken-hearted to miss out on a second successive podium, Sergio Perez admits that colleague Romain Grosjean's horrific crash puts things in perspective.

Just 4 laps from his second successive podium, and 15 points that would have promoted Racing Point back to third in the team standings, the first worrying puff of white smoke emerged from the rear of Sergio Perez' car.

Then came another, then another... until smoke filled the air and the Mexican was forced to pull to the side of the track.

On the pit-wall, team boss, Otmar Szafnauer had his head in his hands, while, having climbed from his stricken car, Perez leaned on the barriers in obvious heartbreak at such a cruel outcome to a fine race.

Speaking after the race however, though hugely disappointed, the Mexican admitted that Romain Grosjean's horrific crash had put things in perspective.

"A day like today is hard to digest, for me, for my team," he told reporters. "It's extremely painful in the championship, those points were extremely valuable to us and can make a huge difference come the end of the season.

"But there's nothing we can do," he sighed, "it's just the beauty of the sport.

"Anyway, today it becomes a little irrelevant to me, the podium, the trophy," he continued. "One more or one less, it's just a trophy.

"What is important is that Grosjean is good, he's fine and he can be back with his family. It was a big shock, you know, to see that big crash and then have to go back to the car in ten minutes.

Following a great getaway at the original start, Perez was third on the grid when the race eventually resumed. Asked how he had kept himself focussed during the long delay between starts, he admitted: "Not easy at all... extremely hard.

Ironically, the man who benefited from his demise was Alex Albon, whose seat Perez admits he is eyeing for 2021.

"I've been ten years in the sport, I think people know what I can do, so I'm pretty relaxed about it," said the Mexican. "I'm confident with my capacities and the way I'm delivering now, but the way I've delivered over the ten years so I'm pleased with that."

With teammate, Lance Stroll crashing out at the restart, Racing Point failed to score points for the first time this season, dropping the Silverstone outfit to 4th - 17 points behind McLaren - in the process.