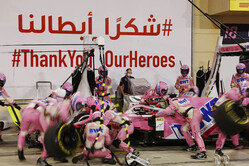 Sergio Perez: "It's really hard for both myself and the team to take today's result, but in the grand scheme of things, it almost becomes irrelevant after Romain's crash at the start. At the end of the day, it's either one more or one less podium or trophy for me, but the important thing is that Romain is still with us and that he's ok. I wish him all the best. It was certainly hard to get back into the car after seeing something like that, but you just have to focus and prepare for the race. I think we executed a perfect race and the podium was definitely ours - it was going to be one of my best in Formula 1. It was gutting to retire with three laps left due to an MGU-K electrical issue. We were going to finish ahead of a Red Bull and a Mercedes, which is a great credit to all of us at the team, and we'd done such a good job all weekend too. We've lost out on some really important points today, which makes it a bit more difficult in the Drivers' and Constructors' Championship battles, but the positive is that there are still two more races to make up for it."

Lance Stroll: "I'm really happy that Romain was able to walk away from that crash as it was a scary one to see happen. I think all of us drivers in the pitlane had to stop for a second and reset before getting back into the car. I'm definitely thinking of him. For me, personally, I'm really frustrated by the race. We've scored two points since Monza and it's been a series of incidents outside of my control that's caused it. At one point this season we were P4 in the Drivers' Championship and we'd had such a strong start to the year, so that makes the current situation all the more frustrating. I can't say much about today's incident, I was going through Turn 8 and was mid-corner when I was hit by Daniil [Kvyat] who came out of nowhere and connected with me. The crash looked worse than it was: I'm ok, and Daniil got a penalty. There's no point thinking about what could have been today or in the previous events. We won't dwell on it because there's nothing we can do about it now. We need this run of bad luck to end and we'll focus on coming back stronger next week and finishing the season on a high."

Otmar Szafnauer, CEO & Team Principal: "A tough evening in Bahrain. Checo was cruelly denied a podium after an MGU-K issue forced us to park the car with three laps remaining. Up to that point, he had driven a flawless race, managing the tyres perfectly, and running comfortably in third place. Lance was just as unlucky - being eliminated through no fault of his own after Kvyat flipped him over. It was a scary moment, but fortunately Lance was checked at the medical centre and is ok. It makes the fight for third in the championship more difficult, but there are still two races to go, plenty of points available, and we know we have a competitive car. We will give everything we have to recover the lost points today and reclaim third in the championship. Regarding Romain's accident, we share the relief of the entire paddock that he only has minor injuries. It was a frightening accident and credit to the FIA and sport as a whole for the safety standards we have worked hard to deliver in recent times."