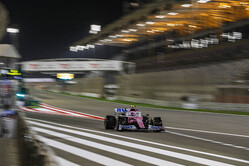 Sergio Perez: "P5 is a great result for the team and I'm very happy with our performance. We were able to be really decisive on the strategy and get through Q1 by using just one set of the soft tyres, which was absolutely the right call and meant we could use two sets of new soft tyres in Q3. When you look at the fact that I found two tenths on my second run in Q3, that call helped earn us several spots on the grid. It was a good lap at the end of Q3, although I think I lost a little bit of time in Turn 13 that might have helped me get P4. It's a real shame what happened to Lance in Q2 because his pace looked good, but I'm sure he can recover in the race tomorrow and score points, which will be crucial in a close midfield battle. It's a good result today for me but qualifying isn't so representative here. What matters is strong race pace, which I think we have, and it'll be important to get a strong start and make good strategy calls. It looks like a two or three-stop race tomorrow, so there's plenty to play for and the goal is to score big points."

Lance Stroll: "We made some changes to the car after FP3 that really paid off and I was happy with the balance of the car going into qualifying, which we demonstrated in Q1 by going P2. Unfortunately, the red flag during Q2 ended up having a big impact on us. After the red flag, there was a miscommunication that cost us a potential place in Q3. We went out on a used set of mediums, when the rest of the field were on new tyres and it stopped us from having any chance of getting into Q3. We'll review the situation tonight as a team, learn from it, and move on. The positive to take is that from P13 on the grid we have a free tyre choice. It's possible to overtake here and strategy is important, so we can make progress. We can aim for the points and I'm happy with the pace of the car, so it's all to play for tomorrow in the race."

Otmar Szafnauer, CEO & Team Principal: "The car had good pace this evening - as seen by Lance ending Q1 second fastest - and Sergio's eventual fifth place on the grid. With Lance in Q2, there was a simple misunderstanding brought about by the red flag and shortened session. By the time Lance went out on track - on used mediums - there was only time for one run, and no time to use softs as well. Had this been more evident, Lance might have run the softs instead. Because Lance had also used a set of mediums in Q1, we didn't have new mediums available in Q2 [because the red flag forced his first lap in Q2 to be aborted]. Sergio's session was more straightforward and his final effort in Q3 confirmed the speed we have shown leading up to qualifying. But it's tomorrow that really counts and there's a long race ahead of us, and plenty of opportunities to show our competitive race pace with both cars."