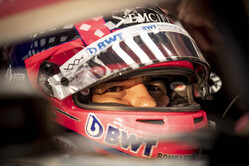 Sergio Perez reiterates that his only hope for 2021 - other than taking a sabbatical - is the Red Bull seat alongside Max Verstappen.

In his post-Turkish Grand Prix debrief, Ross Brawn probably echoed the thoughts of many when he opined that it would be a "tragedy" if Sergio Perez is not on the grid next season.

The Briton's comment followed another strong performance from the Mexican which saw him finish second to race-winner, Lewis Hamilton.

In addition to promoting Perez to fourth in the driver standings, the result put Racing Point back on pole in the battle for third in the Constructors' Championship.

However, dropped in favour of Sebastian Vettel as the team morphs into Aston Martin, Perez' only hope of a drive next season is at Red Bull.

"Right now we're just waiting on the decision, what they decide to do, so that's out of my hands," the Mexican told reporters in Bahrain.

"I'm just approaching these three races as usual," he added, "just focus on the job, keep delivering, the rest is out of my hands. There's only one option, I've said it before.

Asked about the alternatives, such as heading to another discipline, he said: "If I don't have Formula 1 next year I don't see myself doing anything else.

"I will take a year to consider what I want to do, if I really miss it," he continued. "Most of the drivers, they retire, then six months they come back and want to do whatever is available. I have to see. I've never experienced that. My whole life I've been into racing so I have to see also life out of the sport, how it is, how it suits me, then see if I miss it or if I want to carry on with that life.

"I have a lot of interest in other stuff, away from racing, obviously I'm still young, I could see myself later on doing other businesses away from motorsport, not in my 30s you know, but if that comes early I'm happy to consider that option as well.

"I have my family, I want to see my kids growing up, other things you know, I can imagine a life without motorsport."