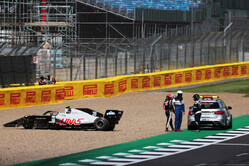 Grosjean started from P17 on the Pirelli P Zero Yellow medium tires and rose to P14 on the opening lap. When the Safety Car emerged following Daniil Kvyat's high-speed accident Grosjean stayed out, deviating from the rest of the field, rising to P5 - opting to gamble on an offset strategy. It left Grosjean vulnerable to opponents on fresher tires and he defended resiliently, remaining inside the top 10, before pitting on lap 37 for hard tires. Grosjean made up ground but was unfortunately unable to make significant gains and greeted the checkered flag P16.

Magnussen made a customary strong start from P14 on the grid on the medium tires and worked his way up to P12 through the course of the opening lap. But as he rounded Club corner to close out that lap he was tagged by Alexander Albon and pitched into the barriers on the outside of the turn. Magnussen's Haas VF-20 sustained terminal damage in the impact though fortunately the Dane was able to walk away unscathed from the wreckage. Magnussen was exonerated of guilt as stewards issued Albon with a time penalty for causing a collision.

Haas F1 Team remains P9 in the Constructors' Championship with one point. Haas F1 Team will be back in action for the 70th Anniversary Grand Prix, to be held at Silverstone, from August 7 to 9.

Romain Grosjean: "It's disappointing, the result, as I drove to the absolute limit from the beginning to the end of the race. The first stint was fun. I found myself up in fifth behind the safety car and I was like 'oh, just like the good old days.' I was happy to stay out, we have to try these things with our car - just like we did in Hungary. I was a bit skeptical for the restart on the tires, but it worked well, and I could keep the pace. I was happy and having fun. I don't think much is going to change for next week, I think the order will stay the same, but obviously there'll be a bit more degradation in the race - so maybe it's a two-stop race, which I'd rather have, a one-stop is a bit boring."

Kevin Magnussen: "I'm all good after the accident, just very frustrated. I had made a great start - again, gained a couple of positions. I'd felt that the car was good on the way to the grid and I said to my engineers that the car was working really well. I'm gutted to be out as maybe we could have done something today. We had done everything we could do. We'd qualified as best as we could, then I got a great start - it was a good first lap with the positions gained, we were close to the top 10. It was looking good, I'm very gutted."

Guenther Steiner: "I would say it was an interesting day. As much as the disappointment is high, the positives we take out of it is that the drivers like the car, they like how it drives - we just need to get faster with it. Romain (Grosjean), once he was in the mix, he could almost keep up with the other cars and in some cases, he was faster - so that's a good sign. Unfortunately, on his pit-stop, he couldn't engage the gear and we lost 10 seconds. That took us out of the chance of scoring a point, I'm saying one point - not plural. Kevin (Magnussen) was taken out on lap one, so there's not much more to say on that one. It's our destiny at the moment that we don't have any luck. The good we take away from here is that when we are in the mix in the race, we can be there. We still have to work on qualifying. So, it was an interesting race. We didn't end up with a point, but everyone's doing a good job, working hard, and sooner or later we'll score again."