Haas drivers have no regrets over Hungary tyre call 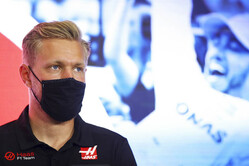 Going into this weekend's race at Silverstone, asked if he had any regrets following the decision to pit both drivers for slicks at the end of the formation lap in Hungary, thus incurring time penalties that saw both drivers drop positions on a day Kevin Magnussen scored the team's first point(s) of the year, team boss Guenther Steiner was in no doubt.

"For sure we would do the same thing again," he insisted. "The ten second penalty was a little bit ambiguous," he added.

"Unfortunately, we cannot appeal it because it's a time penalty, you're not allowed to appeal those ones.

"We need to move on from this, but for sure it spiced the race up for everybody. I don't think we should stop doing these things in racing, otherwise accountants can race in Formula One."

Speaking at today's press conference, Magnussen, who finished ninth on the road but dropped to tenth after the penalty was applied, was adamant that it was the right call.

"Maybe they need to look at it for that, for strategic calls," he continued, "because I think if we aren't allowed to do that that is going to take away from the show.

"I think it's exciting when you have these conditions where it's like right on the crossover that you can see these strategic calls," he added. "It would be good if they could allow that clearly in the rules, I don't think it was 100% clear.

"I didn't know until I landed in Denmark after the race on Sunday," he said of the post-race investigation. "So I hadn't thought about it because in my mind we're not allowed to talk about any procedures, the guys aren't allowed to give us any instructions on burnouts and any driving aids on the formation lap.

"I wouldn't say it was completely clear, not completely straightforward. But at the end of the day it is what it is."

Asked if he would make the same call again, Grosjean was in no doubt.

"1000% we'd do the same thing," he replied. "It was the right call and I was actually surprised that not more people did it."