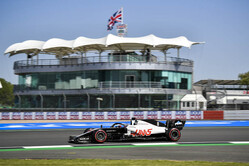 The fourth round of the 2020 FIA Formula One World Championship began with practice Friday at Silverstone circuit as teams prepared for Sunday's British Grand Prix.

Haas F1 Team drivers Romain Grosjean and Kevin Magnussen started FP1 on the Pirelli P Zero White hard and Yellow medium compounds respectively. After logging their install and wake-up runs both drivers switched over to a set of the Red soft tires. Magnussen subsequently turned the 14th fastest lap with a time of 1:29.532 with Grosjean logging a 1:29.576 to place directly behind his teammate in 15th.

Track temperature hit 49 degrees Celsius (120.2 degrees Fahrenheit) to start FP2 where speeds improved for both Haas drivers. However, a 10-minute red flag stoppage caused by Red Bull Racing's Alexander Albon halfway through the session cut-short the qualifying simulation runs of Grosjean and Magnussen. Each banking just five laps on fresh sets of soft rubber, Grosjean clocked a 1:28.564 for 16th on the timesheets with Magnussen setting a 1:28.898 for 19th overall. Both drivers ended the session with high-fuel runs to the checkered, Grosjean sampling the soft and medium rubber on his stint to the flag, Magnussen utilizing the soft and hard compounds.

Romain Grosjean: "It was actually a positive day in the way that the car behaved and so on. I think we also made some good set-up changes that helped me to feel better in the car in the afternoon - which is great. The challenge for the rest of the weekend is that we won't see those high temperatures again, therefore all the work that's been done today needs to be extrapolated into what we think Sunday's going to be like. The balance has been okay and we're getting the best of the car, but after that we're 16th and 19th, so that's obviously not ideal. We wish we could be in a better position, but we just have to do the best that we can. Hopefully tomorrow we get one car into Q2 and mid-term we end up getting both cars in Q2. In the race we need to see if we can get better degradation than other people."

Kevin Magnussen: "It was hot today, which made things difficult - the tires got really hot. At this track, with the high-speed corners, when it's this hot, it's very easy to overheat the tires. It was an interesting day and it'll be interesting to see if tomorrow's cooler temperatures are better for us, that'll be another element of our learning of the VF-20. It doesn't look like we're very fast, but we expected that and we're trying to work with what we have. I think there's a little bit more to find but we'll see."

Guenther Steiner: "The temperatures have been a lot higher today than they will be on Sunday, at least that's what we've been told, so maybe today's not relevant. We're still lacking speed - which we knew coming here. We'll be a little bit on our backfoot here at Silverstone, that became a little more evident in FP2 obviously. At the moment we keep trying to do the best job that we can. We will always keep on fighting."