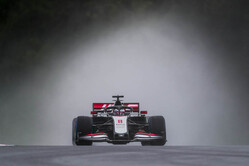 The third round of the 2020 FIA Formula One World Championship began with practice Friday at the Hungaroring in Budapest as teams prepared for Sunday's Hungarian Grand Prix.

Two 90-minute sessions played out in mixed conditions, with FP1 dry but cloudy, then the forecast rain delivering ahead of FP2 at the 4.381-kilometer (2.722-mile), 14-turn circuit.

FP1 saw Grosjean and Magnussen sample different tire compounds to start the weekend. Grosjean ran the opening session exclusively on the Pirelli P Zero Yellow medium rubber. Magnussen opted to run his installation lap and first timed stint on the White hard tire before bolting on a set of the mediums for two additional runs. Magnussen placed 12th on the timesheet with a lap of 1:17.713 and Grosjean 14th with his best lap of 1:17.890.

A wet track was declared ahead of FP2 as the rain arrived Friday afternoon. After almost an hour parked in the garage, Grosjean was the first to wheel his VF-20 onto the track - shod on the Pirelli Cinturato Blue wet tires. He logged five laps to set a time of 1:43.335 for eighth overall before taking a final, solitary lap on the Green intermediate tire shortly before the checkered. Magnussen similarly ventured out in the dying minutes of the session for an installation lap on the intermediate compound - the Dane one of seven drivers to not set a time in FP2.

Haas F1 Team ran a total of 77 laps Friday between the two sessions - 41 by Grosjean and 36 by Magnussen.

Romain Grosjean: "It was my first time in the wet this afternoon, as we didn't get to compete in qualifying in Austria. I did a few laps and the car felt okay - which is good. I think the morning went okay as well. We were more competitive than we were in Austria. I haven't run the soft tires yet, so we don't really know what's going to come with that. Generally, we were happy with the car. There are some limitations, but we've made some set-up changes which should put us in a good direction. The whole team was quite positive, and the momentum was good after the session. There's obviously a bit of a question mark on the weather for the rest of the weekend but I think we're ready for most cases."

Kevin Magnussen: "It did look positive this morning - the car felt good. This is a fun track to drive and I'd say we had a good start to the weekend. We didn't get too much time in the wet. I did an installation lap on the intermediates just to see how it is, there's not too much to say about that - it was very slippery. I'm looking forward to tomorrow and seeing what kind of weather we're going to get. When it's like this, mixed, it makes it tricky and exciting. It always shakes things up a little bit and potentially gives you a chance to do something special, or mess it up, but we'll always go for something special."

Guenther Steiner: "We didn't have any issues in the morning session - which is progress from the last two races in Austria. It was a productive FP1. I think we found a little bit of speed in the car, so that looked a lot better than the last two races. Obviously, the afternoon was rained out. We sent Romain (Grosjean) out so he could get a few laps in on the full wet as he didn't get any driving in last weekend when it rained in Austria. Then we just sent both guys out for a look on the intermediates. It was a very short afternoon. Overall it's been a better Friday than we've had so far this year."