Hockenheim confirms "no Grand Prix in 2020" 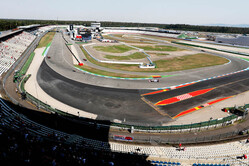 With ten races confirmed, speculation over which events might comprise the remainder of the calendar continues.

It is highly unlikely that F1 will head across the Atlantic, with the United States, Mexican and Brazilian Grands Prix almost certain to be cancelled.

In recent days there has been talk of a third race at Silverstone, though this has seemingly - and sensibly - been ruled out.

While the events in Bahrain and Abu Dhabi are certain to go ahead, it is thought that in the coming days races at Imola and Portimao are to be given the green light.

Though new restrictions have been imposed in Spain in the wake of a spike in virus cases, officials insist next month's race at Barcelona is still on.

On the other hand, the decision in China to suspend all international sporting events this year looks set to end the hopes of the race at Shanghai and also Vietnam.

Though there has been talk of spectators being allowed to attend the race at Monza in September, the Russian Grand Prix that follows three weeks later is the only confirmed event thus far that has tickets on sale.

The turmoil created by the pandemic that is certain to see Imola return to the calendar was thought likely to see the return of Hockenheim to the schedule also, but today officials at the circuit ruled out hope of the track hosting a round of the 2020 season.

"From today's point of view, for a potential race in October, we cannot assume that an event with more than 500 spectators would be possible," said the circuit's managing director, Jorn Teske according to Motorsport.com. "So from an economic point of view, this makes us less attractive for Formula 1 than other race tracks where they are allowed fan events under certain conditions.

"Therefore it will not be possible to live up to our offer," he continued, "which was to hold a grand prix under the special circumstances of the coronavirus crisis. We can confirm, therefore, that there will be no grand prix at Hockenheim in 2020."

Official at the Nurburgring are still in talks with F1, but other than sharing the same financial concerns as Hockenheim, there is concern at the weather conditions in October, the most likely available slot for the event.

On two previous occasions (1984 and 1995) the race was held in October, both weekends were compromised by heavy rain.

Surely if they can guarantee difficult conditions the circuit should be added to the schedule with immediate effect.