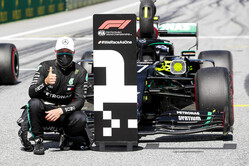 The UK government has confirmed that F1 personnel heading to Britain will be exempt from the mandatory 14-day quarantine.

With the British Grand Prix taking place less than two weeks after the Hungarian Grand Prix the 14-day mandatory quarantine introduced for all travellers to the UK from last month presented F1 with a serious problem.

However, the government has now exempted a number of sports including F1, the sport having satisfied officials that its own rigid protocols were more than sufficient.

Yesterday, the sport announced that in the previous 7 days, 4,032 tests for the virus on paddock personnel had all proved negative.

"Formula 1 is very grateful to the UK Government and Culture Secretary, Oliver Dowden, for their ongoing engagement and sensible approach to this policy," said F1 in a statement.

"Formula 1 is a major contributor to the UK with 40,000 jobs linked to the motorsport industry and billions of pounds of revenue. By working with Formula 1 on this matter the Government has not only helped to ensure fans are able to enjoy F1 this season they have protected jobs and incomes."