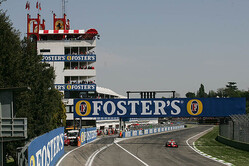 As AlphaTauri carried out a 'filming day' at Imola today, with Daniil Kvyat and Pierre Gasly both on duty, the circuit's boss was pushing for the track, which last hosted a round of the Formula One World Championship in 2006, to form a triple-header with Monza and Mugello.

At present, F1 has identified the first 8 races on its revised schedule, with the remaining races set to be revealed in the coming weeks.

Having contested 991 Grands Prix to date, the Italian Grand Prix at Monza in September will take the legendary marque up to its 999th race.

While F1 bosses will appreciate the significance of allowing Ferrari to celebrate its 1000th race at its own track, Uberto Selvatico Estense, president of Formula Imola hasn't ruled out his circuit making an appearance on the schedule, possibly part of a triple-header.

"Imola has F1 in its DNA," he said, "and on this track the history of F1 has taken place. It must not be forgotten and we must be rightly proud of it.

"Looking ahead, and with an eye to the local economy in this serious moment of crisis, our goal is to bring back the top series to Imola’s circuit from this year.

"The most logical and most suitable solution for F1 fans from all over the world would be to use circuits with great media impact, as Imola certainly is," he continued. "And perhaps together with Monza and Mugello, for a legendary national triple.

"We started since April of this year working with great dedication and passion on this hypothesis, together with the local and regional institutions and the Formula One World Championship, and we hope that the national sports authority will also support our candidature for this season."