Brawn sets out plan for screening at races 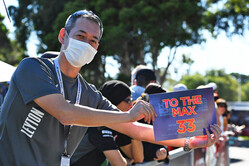 Having recently announced that the Austrian Grand Prix, currently scheduled to kick-start the 2020 season, will be run as a biosphere, "a very enclosed environment where the teams come in on charters (flights), we channel them into the circuit, we make sure everyone's tested, cleared, there's no risk to anyone and we have a race without spectators", according to Ross Brawn, the F1 MD has given further insight into how the sport is intending to ensure the coronavirus doesn't contaminate any member of the 'community'.

"We're working very closely with the FIA," he tells Sky Sports. "The FIA are doing a great job of putting together the structure that we need and everyone will be tested and will have clearance before they can go.

"Then, every two days they'll be tested whilst in the paddock," he continued, "and that will be with an authorised authority and system.

"Certainly for all the European races we'll be using the same facility to conduct that testing and we can assure that everyone has been tested who is in that environment and tested regularly.

"Then we will have restrictions on how people are moving around in the paddock because we cannot socially distance within a team," he added. "So we have to create an environment within itself that is effectively a small bubble of isolation and the teams will stay within their own groups, they won't meet up with other groups and mingle, they will stay in their own hotels. There's no motorhomes going to be there."

Referring to officials such as scrutineers, who will need access to all the teams, he said: "We're just working with those people who somewhat have to go to all the garages and what we can do there.

"So there's a tremendous amount of work going on between ourselves and the FIA and I'm very encouraged by what I'm seeing and hearing that we'll be able to provide a safe environment that we can still perform properly."

While respecting F1's efforts to get back on track, though giving full credit to Brawn for his skills as a technical director, he is not a virologist, and in all honesty many aspects of this plan appear somewhat haphazard.

One can only hope that the sport's powers-that-be are working with viral experts, as the thought of them getting it wrong does not bear thinking about.

Indeed, one can only hope that his wording is not entirely accurate, for testing "in the paddock" would already be too late.

Indeed, only last week, Marc van Ranst, a top European virologist, who is currently advising both UEFA and the Belgium government, warned that "the incubation time for Covid-19 is five days, so you will never be able to say for sure you are not going to develop symptoms".

Using football as an example, he admitted that plans to test staff on arrival at their training grounds and again as they left, would not be effective. "If you get your infection during the day, you will not be able to diagnose it in the evening," he told ITV. "It takes a while for the virus to take hold and be detectable. It is detectable in your throat after three days before you develop symptoms, but it won’t be detectable in a couple of hours after being infected."