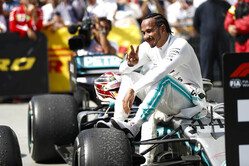 Understandably, in anticipation of the all-clear being given to resume business once the coronavirus pandemic has been officially declared over, motor sport championship organizers are watching for the signal as keenly as Valtteri Bottas eyeing the starting lights on the grid.

However, with all manner of championship wanting to get underway or resume, the FIA is concerned that the scramble to get going again could see some of its series compromising others in terms of TV coverage, media attention and circuit and officials availability, as their revised schedules see events overlapping.

"It's crucial that we prioritise the staging of events," says the FIA's deputy president for sport, Graham Stoker in the latest edition of the organization's AUTO magazine.

"What would be counter-productive would be to get involved in turf wars," he continues. "Let's not get involved in disputes about who has got which slot and what prior agreements might specify. That approach will not work.

"The main priority is to get motor sport going again and if that means some ‘super weekends' with multiple events happening, in co-operation and with flexibility, well, why not?"

Earlier this week, Chase Carey revealed F1's plan to begin its season in July in Austria and conclude in December in Abu Dhabi.

While Croker appreciates the importance of F1, he is concerned that motor sport's Blue Ribband series, does not compromise the sport at grass roots level.

"Motor sport has got to pull together," he says, "and we've got to have flexibility in terms of events and venues and thinking outside the box in order to get things going again in a spectacular way that will obviously attract public interest.

"We should also demonstrate that motor sport remains relevant and a positive influence, through its messaging and actions."