Silverstone confirms no spectators if GP goes ahead 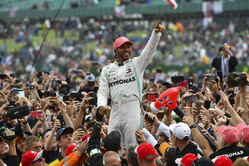 In a brief statement this morning, shortly after it was confirmed that the French Grand Prix has been cancelled, F1 boss, Chase Carey revealed plans for a 15 - 18 race calendar.

With Austria scheduled to finally kick-start the season, Carey admitted that the European events that comprise the opening rounds of the schedule will take place 'behind closed doors'.

At the same time, Silverstone, which is likely to host the second round of the season, confirmed that it is refunding all ticket holders for this year's race.

"I am extremely disappointed to tell you that we are unable to stage this year's British Grand Prix in front of the fans at Silverstone," said circuit managing director, Stuart Pringle in a press release.

"We have left this difficult decision for as long as possible, but it is abundantly clear given the current conditions in the country and the Government requirements in place now and for the foreseeable future, that a Grand Prix under normal conditions is just not going to be possible.

"Our obligations to protect the health and safety of everyone involved in preparing and delivering the event, our volunteer marshals and race makers, and of course, you, the amazing fans, means that this is the best, safest and only decision we could make.

"We have consistently said that should we find ourselves in this position we will support Formula 1 as they seek to find alternative ways to enable F1 racing to take place this year.

"Following this weekend's news from the Department for Digital, Culture, Media and Sport we are now working with them on the viability of an event behind closed doors. Should this be possible, it will be of some small comfort for you to know that the 2020 Formula 1 Pirelli British Grand Prix will be available to watch live on Sky and Channel 4.

"Nothing matters more to Silverstone and our owners, the British Racing Drivers' Club, than taking care of our motorsport fans," he added. "Without you we wouldn't exist - it's as simple as that. I would like to reassure you, (that) customers who have purchased a ticket will be given the option of either transferring their booking directly to 2021 or of taking a full refund.

"All customers will be contacted in the next two weeks with full details, so we do ask you to please be patient with us as we work through all our bookings.

"I can also confirm that next year, we intend to give away thousands of tickets for the 2021 event to NHS and other key workers who have literally been putting their lives on the line for us all, during these challenging times. No one can be in any doubt of the huge debt of gratitude we owe to them."

Though Carey confirmed that Austria will host the season opener, there were no details of whether - as is being widely reported - it will be a double-header with back-to-back races as has also been claimed in Silverstone's case.