Clock is ticking for Azerbaijan race 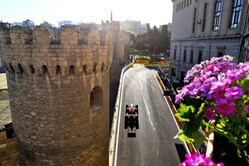 The executive director of the Azerbaijan Grand Prix has warned that time is running out if F1 is to race on the streets of Baku this year.

Stating that F1 hopes to hold as many as 19 races this year, Ross Brawn also admitted that the season will most likely begin in Europe.

While Helmut Marko is confident that the Austrian Grand Prix can go ahead as planned, the French, British and Belgian events are all in doubt as their respective governments extend their various lockdowns and bans on public gatherings.

To raised eyebrows, the first Grand Prix on the streets of Baku was in 2016, when it was designated the European Grand Prix, and even though it is officially in Europe the country is 3 hours ahead of the majority of European nations.

Nonetheless it is, as we said, officially in Europe, and is therefore likely to be one of the rescheduled events that F1 is targeting.

Of course, another factor that may well influence F1 bosses as they put together their revised calendar is the fact that the oil-rich country is at the higher end of the scale when it comes to race hosting fees.

Despite those high fees, according to PricewaterhouseCoopers (PWC) the event has been a success for the country, boosting the construction industry alone by $181.4m.

Indeed, PWC reports that over the few years it has been held the total economic impact of the race has been a very impressive $506.3m.

According to PWC, the economic impact includes "the spend across various sectors including the professional services, hotels and general accommodation, catering, transport, social and cultural services, agriculture, post and telecommunications, wholesale trade and electricity, gas and water amongst others".

Understandably, Azerbaijan is keen to keep the momentum going and though the race planned for 7 June has been postponed it is hoped that the event will form part of the revised calendar when it is confirmed.

However, speaking to Forbes, Arif Rahimov, the executive director of Baku City Circuit, admits that the clock is ticking.

"In our case, it is still uncertain whether or not we will be able to host the event," he admits, revealing that he would require "at least a 10 to 12 week lead time to be able to prepare for the race that has to be run before the weather becomes unpleasant (mid-October)."

However, it is not just about Azerbaijan - which to date has experienced 1,373 confirmed cases of the coronavirus and 18 deaths - getting the green light, but those nations where the teams are based, namely the UK and Italy.

Looking on the bright side however, Rahimov believes that the race, which attracted an estimated 85,000 fans last year, could receive a boost following the drought of on-track F1 action.

"Coming out of the quarantine, we might actually see a sudden overall boost in the entertainment sector," he says. "You can imagine how this can be applicable to all the people who have been locked up at home for months.

"There will certainly be less races in the F1 calendar," he adds, "meaning that fans might want to travel to the nearby race if their own race has been cancelled."

However, he also admits that "there could be a potential social aftershock, where people would avoid public gatherings even after we, hopefully, defeat the virus", not to mention the widely anticipated "economic downturn means a reduction of household disposable income that is usually spent on entertainment."

With Baku requiring ten weeks' preparation, in order to hold a race before the "weather becomes unpleasant", means we are looking at early to mid-August by which time F1 bosses must make their decision, and that's around 16 - 17 weeks away.