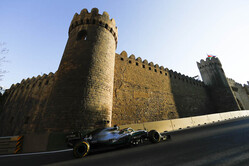 With eight races either postponed or cancelled, it is understood that in the coming days the plug will be pulled on the Canadian Grand Prix also, while France is looking increasingly unlikely.

Despite Chase Carey's assurances that a season comprising 15 - 18 races will eventually get underway, as previously reported, should the coronavirus pandemic end miraculously overnight it would still take months to make all the necessary arrangements.

Among the races that have been postponed thus far are two of the events that pay among the highest race hosting fees, those in Bahrain and Azerbaijan.

According to F1's financial filings, "fees for Events outside Europe [are] typically due three months before the relevant Event".

Consequently, at a time one promoter has told the Daily Mail that he has already asked F1 bosses how his fee "will be returned if his race is cancelled", F1 could be looking at refunding around £181.9m.

In addition, corporate hospitality ticket buyers would also need to be refunded around £24.4m ($30.6m).

Last week, credit rating agency Moody's said that "Formula One had substantial liquidity headroom of around $900 million, comprising $400 million cash balance and $500 million undrawn committed revolving credit facility. Moody's expects this to be sufficient to absorb cash outflows from potential refunds of advance payments from promoters, sponsors and broadcasters, team payments, other overheads and interest costs in the event that the 2020 season is cancelled".

However, it warns that "the assessment of liquidity headroom in a full cancellation scenario is complex and there remains a degree of risk that liquidity would not be sufficient, although Moody's considers this risk to be low".

At a time Zak Brown already fears for the future of at least four teams, further postponements or cancellations would hit hard.

The teams rely on prize money, which last year amounted to £800m ($1bn) - 68% of F1's underlying profit - and the continued uncertainty over the 2020 season has no doubt played a significant part in the decision by McLaren, Williams and Racing Point to place the majority of their workforce on furlough, while F1 itself has put half of its workers on the taxpayer funded scheme.