Brown fears F1 will be decimated unless budget cap is lowered 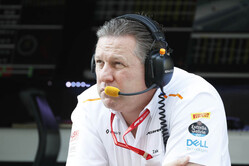 For some time, there has been speculation over the future of at least three teams.

Haas, is as good as gone, and despite Gene Haas' claim that he will see how the first few races pan out - whenever that might be - the writing appears to be very much on the wall.

Despite positive noises from Renault, and even a few interesting signings, the French manufacturer also appears to be heading for the exit, its lack of form on track only compounding the frustration of a car manufacturer which is seeing sales plummet.

On course for its eighth constructors' crown, not to mention Lewis Hamilton equalling Michael Schumacher's record of seven titles, there was already speculation over the German team's continued presence on the grid, however, like Renault this has heightened in the wake of the damage the car manufacturing industry is facing at the moment.

Couple this with the uncertainty over Toto Wolff's future with the team, a situation not helped by the fact that twice in recent weeks major decisions regarding the team have come from higher up the food-chain, from the top of Daimler-Benz, and one might conclude that the Three Pointed Star is looking to leave F1 and go all-electric.

This, coupled with the ongoing fall-out from the coronavirus, is why McLaren boss, Zak Brown fears for the sport's future, warning that as many as four teams could leave F1 in the near future.

Though the budget cap, which will still be introduced next year even though the main draft of rule changes have been held over until 2022 or 2023, has already been reduced, Brown wants it to be reduced further still, warning that failure to do so could destroy the sport.

"Could I see, through what is going on right now in the world if we don't tackle this situation head on very aggressively, two teams disappearing? Yeah," he tells the BBC. "In fact, I could see four teams disappearing if this isn't handled the right way.

"Then, given how long it takes to ramp up an F1 team, and given the economic and health crisis we are in right now, to think there would be people lined up to take over those teams like there has historically been... I don't think the timing could be worse from that standpoint," he adds. "So I think F1 is in a very fragile state at the moment."

Though the teams have agreed to lower the budget cap to $150m, Brown believes it should be lowered further, possibly as low as $100m, though he would accept $125m.

"You have everyone at $150m, and the strong majority, including one of the big teams, willing to come substantially under $150m," he says, the "big team" thought to be Mercedes, or rather Daimler-Benz.

"If we don't make an aggressive enough budget cap and some people feel they have to top up this year and have no chance of getting it back," he warns, "then they ask themselves: Why are they in it? I don't think anyone competes in F1 just to make up the numbers.

"In football," he continues, "while everyone knows Manchester United or Liverpool are going to win more often than not, every team has a chance to beat them, and in F1 it is just not the case.

"And a couple of the teams are putting their sporting interests well ahead of the greater good and missing the point that they are really running the risk of jeopardising the sport... and then we all lose.

"Sport in my mind is a chance for everyone to compete fairly and pretty equitably. It is like a heavyweight boxer who only wants to fight middleweights."

Ahead of a meeting of the various team bosses today (Monday), Brown admits that he expects it to be tense.

While F1 is indeed facing a crisis, it seems odd to hear McLaren taking this stance. At a time Ron Dennis is in the news for being the driving force behind a charitable initiative providing meals for NHS workers, one recalls his legendary stand-offs with the likes of Eddie Jordan and Paul Stoddart when they were making the same sort of calls for the sport to tighten its belt as Brown is making today.

Furthermore, at a time a number of football clubs and businesses are being criticised for putting workers on furlough, thereby forcing the British taxpayer to pick up 80% of the wage bill, McLaren has become the first F1 team to follow suit, somewhat ironic when one considers that the company is controlled by Bahrain's Mumtalakat sovereign wealth fund, which has a 57.7% stake, while 14.7% is owned by the Saudi TAG Group, 10% by Canadian tycoon Michael Latifi and the remainder held by minority investors.

Referring to the decision to place the majority of its workers on furlough, Brown says: "It was the toughest decision I've had to make. While we're a well-funded racing team, everyone has their limits - and as it relates to F1, it is no secret we lose a lot of money and my shareholders want value creation out of F1. So just letting the losses widen is not an option.

"I don't have an unlimited cheque book," he adds, "so it was the responsible thing to do, and quite frankly I am disappointed but not surprised that many teams haven't already followed suit.