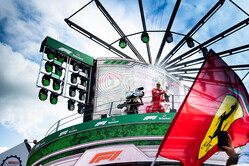 While much has been written about the financial difficulties the teams, and indeed F1 itself, may face the longer the coronavirus pandemic continues, other than news of cancellations or postponements, little thought has been given to the race promoters.

For most circuits, the Grand Prix is the annual blue riband event, the highlight of the calendar, in some cases perhaps the only race weekend of the year, and while some receive far more government support than others, and some none at all, all rely on ticket sales to help balance the books. Indeed, with F1 taking the trackside advertising and hospitality revenue, even at the best of times race promoters face slim pickings.

While Chase Carey talks of a 15 - 18 race schedule, teams talk of extending the season into 2021, two-day weekends, reverse track layouts and events behind closed doors, what about the race promoters.

"They have to be willing to accept lower fees if they want their promoters to be healthy," one race organiser tells the Independent.

He goes on to explain that promoters are in a Catch-22 situation, as they need to order - and pay for - equipment in advance, and at the best of times most have limited funding available.

Normally, advance ticket sales aid cash-flow, but with the current uncertainty over when or even if races will take place and whether fans can travel to attend them, the situation is worrying.

"We reserve hundreds of buses which have to be booked 90 days before the race and have cancellation fees," says the organiser. "We have another contract for the traffic because we hire hundreds of police officers over the race weekend and there are cancellation penalties for that too.

"Then there's the setting up of all the temporary grandstands and hospitality tents which are ordered and negotiated six to eight months before the race and are set up sixty to ninety days ahead of it. Once the race is six weeks away we are spending more than a million euros a week to prepare.

"We usually sell most of our tickets now," he adds. "Most of the sales are to out of town visitors and they don't usually make last minute plans. Around 80% of them book more than four months ahead. So the key selling time for us is now."

With the schedule 'up in the air', Azerbaijan organiser, Arif Rahimov says that tickets to some events may have to be on sale "for shorter periods of time.

"I know, for instance, that some promoters start next race sales immediately after their event," he adds. "This means that they would have missed three to six months of sales during the period of uncertainty."

"Ticket sales are down, not only down but have stopped all together for all motorsport events worldwide," adds Ariane Frank-Meulenbelt, managing director of officially-licensed F1 ticket agency GPTicketshop. "Understandably people have other things to worry about than F1 or MotoGP and also no one knows when and where we will start racing again and how soon free travel will return.

"This, in combination with an economic shutdown worldwide, is not an ideal scenario for ticket sales. Nonetheless we remain optimistic that once the pandemic slows down or is over we will return to normal sales figures, whether this will be latter half of 2020 or only in 2021 remains to be seen."

The uncertainty over future races isn't the only issue worrying promoters, for the cancellation and postponement of previous events has a knock-on effect.

"One of the things that the later races can benefit from is excitement and awareness in the early part of the season," says another organise. "We rely on people getting excited about it when they see it on TV.

"If the season doesn't kick off until July the interest just won't be the same. All those races leading up are complementary to our race."

Across the season, race hosting fees average around £22.8m and are the second biggest source of revenue for the sport, however, organizers warn that Liberty may have to accept lower fees if the season it to get underway.

"F1 is attracting lower ticket sales so they should take a lesser fee," says one organiser. "If our revenue is down from last year, we would like F1 to absorb the amount we are down by. They should just adjust the fee by that amount and if it goes up they can have more."

"It is blindingly obvious," adds another. "People need to make arrangements to go to a race, ask for days off, book hotels if visiting from another country, etc. I think cancelling this year altogether will be the only way much as I would regret it."

Were the season to get underway in July, as feared, or even August, in order to fit in 18 races there would need to be races almost every weekend.

However, that is assuming that the 18 countries get the all-clear, not to mention the UK, Italy and Switzerland, which is where the teams are based.

Looking at Melbourne, for example, where just one case of the coronavirus led to McLaren withdrawing and the race being subsequently pulled, other promoters are highly unlikely to take the same risk. At a time the UK, Italy and Switzerland have in excess of 120,000 cases of coronavirus, it is increasingly likely that even starting the season in August is overly optimistic.

It may be "better off not having the event," admits one promoter. "Cancel it far in advance so that I don't spend money on people and set up and then find out that it is cancelled. That's the worst case scenario.

"An Australia type incident for us would cause bankruptcy because we will have spent millions already," he adds. "The ticket refunds are what would kill us.

"We take money from fans and go out and start buying grandstands with it because you have got to build the spectators their seats. If the race gets cancelled all of a sudden, the grandstands are sitting there and you have got to give refunds so you are screwed."

In Azerbaijan, Rahimov admits that he has "an agreement with F1 that we will only confirm our date in the calendar once the threat of another cancellation is past.

"Moreover, we would need at least a 10 to 12 week lead time to be able to prepare for the race," he adds.