Branson to assist F1's return to the track? 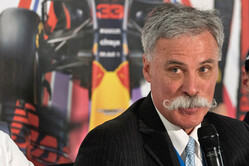 Richard Branson, currently taking flak for his reaction to the coronavirus, is in line to assist Chase Carey in getting the 2020 F1 season back on track.

At a time Branson is said to be seeking government assistance for his airline as it struggles with the impact of the coronavirus, the Briton is under fire for allegedly asking staff to take 8 weeks unpaid leave and then claim statutory sick pay from the same government.

However, speaking in a hurried online press conference earlier, F1 boss Chase Carey has revealed that Branson could play a key role in getting the sport back on track.

"You know, I'm delighted that in partnership with Miami City, and Mr Stephen Ross, owner of the Miami Dolphins, and with the unfailing support of Mr Richard Branson of Virgin, we are able to announce a solution to the 2020 season and the terrible condition the world currently finds itself in," said the American.

As Carey continued, behind him as large video screen showed a high-definition drone flying over Miami.

"With the amazing support of Steve, and the City of Miami we have established arrival screening and checking for guests and teams at separate terminals at Miami International Airport, good old Wilcox Field, that will ensure safe arrivals," Carey continued.

"We have then partnered with dear Richard, who has just launched his remarkable Virgin Voyages, and now has no clients. So we have Richard's boats at our disposal, and with some magic by Herman Tilke we have linked them."

Pausing as the drone continued its journey, heading out over the ocean towards a cluster of Virgin Voyages ships, Carey said: "Herman and his team have solved the problem of linking the boats with flexible bridges!

"Ladies and gentlemen... we will have the teams and pit lane on one ship, the press on a second, and then a limited number of fans from various countries well-spaced on another two ships! Between the bridges and tyre ships we will be able to build a three mile circuit hovering thirty feet above the sweet blue waves of Miami!"

Smiling at the screen as the drone performed a flawless fly-past of four massive cruise ships joined by glistening flexible road bridges, he continued: "Please fans, hear our call for a season that is going to blow all others... literally, out the water!

"We will reconfigure the track each week, and allow fans from different regions to attend in perfect safety! Please refer to our web site for ticket details and booking terms and conditions."

Formula One Management says some existing tickets will be honoured and fans should check their web site for details.