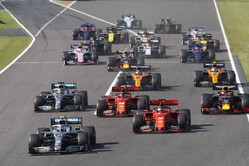 As previously reported, when Liberty Media bought F1 at the beginning of 2017, it wasn't only paying for the sport but also for a loan that its previous owner, CVC, had taken out.

The loan that Liberty inherited from CVC had a crucial condition known as a covenant, an example of which we cited was a person applying for a mortgage. The covenant in that case being a warranty of how much the person applying for the mortgage earns for it is their earning capacity that decides how much a lender is willing to risk.

In terms of the kind of loan F1 has, the amount that can be borrowed is determined by how much profit the company makes, so if the profits nosedive below a certain level alarm bells will ring once it appears the repayments could become an issue.

Uncertainty over the sport's future at this time has seen F1's stock value crash by 46% to $3.1bn (£2.85bn) in just two months. However, contrary to recent speculation this doesn't mean F1 is susceptible to a hostile buy-out because stockholders in F1 don't own any of its equity. On the other hand, F1’s debtholders could kick-start a change of control.

Forbes reports that F1 has a $500m (£460m) undrawn revolving credit facility and a $2.9bn (£2.66bn) loan, which, according to filings, “is secured by share pledges, bank accounts and floating charges over Formula 1’s primary operating companies".

In other words, if F1 defaults on the loan, the lender would become the new owner.

Should a company breach its covenant, which is the ratio of its net debt to its operating profit, the risk is increased, for the less profit a company has available to service its debt.

JP Morgan previously reported that F1 "could conceivably breach this level with an extended shutdown", and this was before the opening 8 races of the season were either postponed or cancelled.

Now, Moody's, the American business and financial services company, has announced that "there is a relatively high probability that the company will breach its leverage covenant in 2020 which applies when the revolving credit facility (RCF) is drawn or available."

Changing its outlook on F1's debt from positive to negative, Moody's said this was due to the "severe disruption to the 2020 race calendar and risks that the 2020 season will be materially curtailed as a result of the coronavirus outbreak", adding that there are "expectations for weakened earnings and cash flow generation, higher leverage and liquidity erosion in 2020 as a result of this disruption to the race calendar".

"Further postponements are likely," warns Moody's, "although there is substantial flexibility to reorganise the race calendar at the point when travel restrictions are lifted. It is not possible to predict the outcome of the 2020 season at this stage, with a range of possible outcomes from a modest curtailment to around 15-18 races to a full cancellation of the season."

Even with the threat of the full cancellation of the 2020 season, Moody's, like JP Morgan, does not believe that F1 will default on its debt, the former stating that the terms of F1's loan "permit the leverage covenant to be amended or waived by the requisite proportion of the RCF lenders."

Which basically means that the lenders could allow F1 to miss payments, though it remains to be seen if they would actually do this.

Moody's says F1 has enough "cost flexibility, low capital spending and strong liquidity headroom to manage through severe downside scenarios including full cancelation of the 2020 season", adding that "the company may also be able to draw on support from its owner, Liberty Media Corporation which currently has substantial available resources".

However, it warns that "the assessment of liquidity headroom in a full cancelation scenario is complex and there remains a degree of risk that liquidity would not be sufficient, although Moody's considers this risk to be low".

Moody's also notes that F1 faces "potential revenue challenges in 2021 due to the timing of TV contract renewals", referring to the broadcasting contracts in Austria, Brazil, Germany, Italy and Spain, which are all in the final year of their contracts.

Moody's warns that F1's credit rating "could be downgraded if concerns over liquidity arise in 2020 as a result of further disruption to the race calendar".

However, it is not all doom and gloom as it adds that the sport is "relatively well placed to recover post coronavirus crisis, underpinned by its contracted revenue nature, strong franchise, large fan base and high cash conversion. The company might face some revenue challenge in 2021 due to the timing of TV contract renewals, as well as a weak macroeconomic backdrop. However the strength and attractiveness of the Formula One franchise provides some protection in the context of wider broadcasting market challenges."