F1 puts half its workforce on furlough 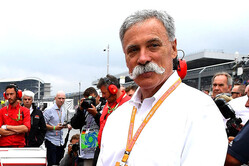 Formula One has followed the example of three British F1 teams, as it places half its workforce on furlough.

The move is certain to draw public criticism at a time Liverpool Football Club was essentially 'shamed' into its previous decision to furlough non-playing staff, thereby forcing the taxpayer to pay workers' salaries.

Liverpool, like Tottenham (sigh) and Newcastle United, had placed non-playing staff on furlough, while the likes of Chelsea, Manchester United and Manchester City continued to pay its staff. Yesterday, in the face of the public outcry, including its own fans, Liverpool reversed its previous decision.

However, while two of Britain's most successful F1 teams, Williams and McLaren, have taken advantage of the scheme, as has Racing Point, it has been revealed that F1 has placed half of its 500 strong workforce on furlough.

Since buying the sport at the beginning of 2017, F1, under its new American owners, Liberty Media, has increased its spending dramatically, what with a major rise in its headcount and splashing the cash on a new HQ in the heart of London.

Though F1 has the right to take advantage of the government's scheme, which sees the taxpayer foot the bill for up to 80% of employees' wages - up to a monthly limit of £2,500.00 - it was mainly put in place for smaller businesses likely to be driven under by the coronavirus pandemic, not for football clubs spending ever more ludicrous amounts of money on players and F1 teams spending tens of millions in order to gain fractions of seconds on the race track.

However, with F1 facing a serious financial hit the longer the crisis continues, perhaps the move - which was always going to be unpopular - is a clear sign of just how bad things really are.

It is understood that senior staff, including Chase Carey, Ross Brawn and 15 other directors (?!?), will take a 20% pay cut.