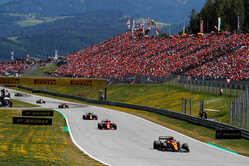 On Monday, following weeks of speculation, Chase Carey confirmed that the Austrian Grand Prix is scheduled to finally kick-start the 2020 season into life, albeit behind closed doors.

Indeed, the F1 boss admitted that all the early rounds of the proposed schedule will likely take place without spectators.

Austria's health minister, Rudolf Anschober has now confirmed that if the event is to take place it must be behind closed doors.

"Authorisation to stage the event depends entirely on the security plan that the organisers present," Anschober told Radio O1. "We will only allow such events under very strict conditions and of course, I think it goes without saying, without a crowd."

Previously, Red Bull's motor sport consultant, Helmut Marko laid out the plan for the event, which could be a double-header.

Other than no spectators, teams and their sponsors will not be allowed guests, while the media will also be excluded - all interviews and coverage to come from one source and relayed to the various outlets.

With teams required to reduce their staffing levels at the track to the bare minimum, the entire 'circus' would remain within the confines of the facility for the duration, ensuring there is no risk to (or from) the local population.

It is understood that all those travelling to the event may be required to provide certificates confirming that they are not infected with the virus.

"We will try to reduce participants from teams and suppliers as much as possible," he added. "This increases the chances that it may be signed off.

"But clearly, all of this can only be done within the (Austrian) safety regulations. They will still be in force at the time We are working hard to ensure that all this goes hand in hand. I see the chances are good."

Incredibly, as if this wasn't already a somewhat controversial plan, Marko suggests that there be a full support race programme.

"Formula 2, Formula 3 and Porsche Supercup should be part of it," he said. "This is a message to the sport.

"I don't know whether TV will miss background stories that will not be possible due to the strict regulations," he continued, "but maybe we can broadcast support races instead of them."

He clearly forgot to mention the grid girls... or perhaps the return of the Formula Unas.