Lammers accepts Dutch GP may not happen this year 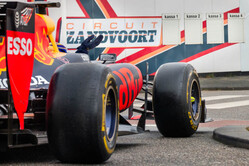 On a weekend, Zandvoort, the legendary seaside track, should have been buzzing with the sound of F1 engines, 35 years after they were last heard in anger among the sand dunes, the circuit, like so many others, remained silent.

The ongoing coronavirus pandemic means that what should have been the first European race of the 2020 season remains one of seven now hoping for an alternative date later in the year.

And as the window on 2020 slowly closes, the circuit's sporting director, former F1 driver, Jan Lammers admits that the race may have to be postponed until next year.

"We're working with a very narrow window," he tells Motorsport Week. "First of all we have the 1st of September, before that we can't say anything really, unless something substantially changes, but basically until 1st of September... this is the case.

"But even running a race without spectators would still mean you have a few thousand people in the facility, which is like a full stadium for an amateur soccer match," he continues, "so where does the government stand there? We have to see if a clear question comes we have to come up with a clear answer. For that we have to check with the government where we stand.

"It looks feasible, both because of the amount of people and the timeframe we're talking about, somewhere in late September at the earliest, but we don't count on it anymore, we just have accepted it's very likely that it will simply move one year further."

Pondering what should have been the sport's triumphant return to the circuit at the weekend, he says: "It was a very weird feeling... I live pretty close to the race track and you have this hidden clock inside yourself, so Friday morning you think first practice would have been wet, I was monitoring everything during the weekend based on the programme that was scheduled.

"Sunday would have been a beautiful day, but still if you see the drone shots - which have been popular - and although it is a shame the race is not taking place this year as it looks, at the same time we are delighted with how the facility has completely transformed to one of the nicest tracks in the world, so we're very, very proud with what we've been able to achieve so far.

"It's bizarre that you can't race but you know it is the same with the whole sports world, Champions League, Premier League, you name it, it's all on the backside, we're all in this together and what I've always said is that you shouldn't want to jump the queue and feel pity, feel sorry for yourself, you have to take it on the chin and just live with it."

One of the driving factors behind Zandvoort's return to the calendar was clearly the 'Max factor', the rise of Holland's hero, Max Verstappen, and while the Orange Army remains on standby, Lammers is confident that the Red Bull driver's legion of fans will accept a 'closed doors' event in the short-term.

"At first my personal reaction was like ‘well you don't want to do that without the fans'," he admits. "But that was a month ago, in the meanwhile we learn you have the spectator who actually bought a ticket, we've seen now that if they have a choice between either seeing him race in Zandvoort, and being present, or not seeing him race in Zandvoort at all, or on television, then that's the alternative: they just accept they want to see him at least race at Zandvoort on TV.

"They've accepted that fact," he adds, "they don't blame anyone for it, we're very blessed with a loyal fan-base. At the moment they're open for it, they want to see him race at Zandvoort, and if they can't be present then they accept the ticket for next year remains valid."

However, if the race goes ahead without fans in the stands, Lammers warns that his circuit cannot be expected to pay for the privilege.

"If FOM wants to race here without the public it would have to be in a way that doesn't cost us any money", he says.