Ricciardo quickest as Renault save the best for last 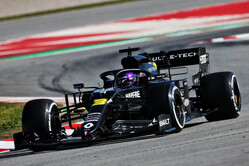 At a time fans, pundits and inhabitants of Planet Paddock alike are trying to make sense of pre-season testing and what it all means for Melbourne and beyond, this morning's events in Barcelona have only added to the mystery.

In a couple of Q3-style bursts of frantic, flat-out activity, we finally saw what most of the teams can do and as the tyre smoke cleared, it was Daniel Ricciardo that ruled the roost, ahead of Charles Leclerc and Lewis Hamilton.

That's right, Renault, who have seemingly been MIA for most of the test - certainly the end of session media updates haven't appeared since the opening day - suddenly turned up the wick, bolted on the C5s and allowed Ricciardo to go for it.

At a time it genuinely appeared that the French team was seeking an excuse - any excuse - to exit the sport stage left without losing too much face, blaming the future of the automotive industry, the legality of the Racing Point, the 2021 regulations of Brexit, Ricciardo bangs in the second best time of the entire test.

Indeed, over the course of those four hours, seven of the ten teams posted their fastest times of the entire test.

While one would expect Ferrari to be up there, Leclerc posting a time 0.5s quicker than his teammate's previous best, the Italian team still doesn't convince, certainly when one considers what's going on behind it.

Following the engine-related issues that have caused the works team and customer Williams, this morning was trouble-free for Mercedes, where Lewis Hamilton added another 90 laps to the W11's tally. This was the world champion's last time in the car before Melbourne, and he and his team must now be heading down under feeling mighty confident.

And so to Racing Point and McLaren.

Sergio Perez then responded by going quickest in the opening two sectors before backing off in S3, almost as if the Mexican was teasing us.

The Racing Point driver subsequently posted a 16.658 on the C3s, quicker than the McLaren on the C4s.

As more drivers switched to the softest compound the timing screens lit up like an old fashioned pinball machine, with Ricciardo, Grosjean and Leclerc all posting impressive times.

No sooner had Leclerc gone quickest on the C5s, his first experience of the tyres, than Albon was off at T12, the Red Bull driver thought to have been caught out by the wind.

As the drivers headed back to their respective garages, the sky began to cloud over and the temperature began to drop, almost as if the gods were taunting us... 'you've had your fun for the day'.

Whether we see any more hot laps this afternoon remains to be seen, for having proved a point some might opt to return to long runs.

That said, we've yet to see the Red Bull or Racing Point flat-out on the C5s so fingers remain crossed.

As is often the case, Hamilton led the way in terms of mileage, the Briton completing 90 laps, ahead of Grosjean (86) and Leclerc (76). Perez, on the other hand, has completed just 43.