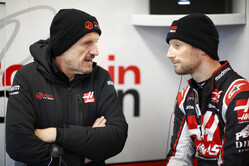 Not for the first time, it was events off-track that appeared to dominate in Barcelona, as the final phase of testing got off to a busy but fairly uneventful start.

While there were three red flags, one for Vettel, one for Latifi and another when Verstappen and Kvyat stopped within moments of one another, it was talk about driver contracts, the legality of the Racing Point and the threat posed by the coronavirus that dominated.

With all bar Haas running two drivers today, between them the 19 drivers on duty totalled 1,217 laps, with Grosjean completing the most (107) and Gasly the least (25).

However, taking into account the fact that the Frenchman was Haas' sole representative, this meant that Mercedes completed the most (179), ahead of Ferrari (164), Racing Point and Renault who both completed 127 laps. AlphaTauri, on the other hand, completed just 86.

"It's been a good session and a good start to the second week of testing," said Hamilton. "We've just got our heads down, trying to continue increasing our mileage and our understanding of this car - through the subtle changes with car set-up, the tyres and the aerodynamic package.

"A fairly standard day, but it was a bit windier out there and it felt like the track had less grip - so there was some sliding around. The car didn't quite feel as good as the first week, but I'm sure that will change as the test progresses and the track conditions improve."

"Very good mileage today, 90 laps," added Bottas. "For half a day in the car, that's really good. We got some good set-up tests done and focused on long running.

"I think we picked up lots of learning points, although it was a bit tricky this afternoon with gusty wind, which made it sometimes more difficult to understand the set-up changes in detail. But I am sure we'll analyse everything overnight and find the learnings from it.

"Everything ran smoothly, except a slightly late start to the day with some big changes over lunchtime. But still we got some good running in and it's good to be back in the car again."

"It was nice to be back in the car today," said Leclerc, "even if the wind that intensified in the afternoon complicated our programme, because it meant the data we gathered, relating to the handling of the car, could not be relied upon completely.

"At least we managed to cover a good number of laps, moving forward in terms of our understanding of the car. Then, finally, in the closing minutes, the wind died down and I was able to do a run that was more reliable in terms of feedback. At the moment, it’s impossible to make comparisons with our rivals.

"Over the next two days, we will continue to concentrate on ourselves to try and get all the potential out of the car."

"We had a small issue with the suspension and lost a bit of time so this morning was a little frustrating," admitted Albon, "but we did so many laps last week we're still on a good footing and haven't really fallen behind our plan.

"Even though we didn't get as many laps as expected, the car was feeling pretty good and already an improvement on how it was last week," he added. "Obviously, this week there will be more of a focus on performance, and we've taken some steps in the right direction. We're trying to get the car into the best window. It's already in a good place but there are little pieces of the puzzle we're trying to fit together throughout the test, getting us ready for Melbourne."

"Today I tried the new Pirelli tyre compound," added Verstappen, "but overall we were trying lots of things, learning how the car reacts under various circumstances, so when we reach Australia, we'll know what to expect.

"We won't know how good we are until we get to Melbourne," he continued, "because testing isn't about setting lap times but trying new and different things. I stopped on track just before the end of the session but we're not concerned and overall it was a positive day. We have a lot of grip but so do the other cars so let's see what happens when we go racing."

While Kubica's best time was posted in the morning, Verstappen, Perez and Kvyat went second, third and fourth respectively in the afternoon, though the Pole's timesheet topping time remains 1.210 off the pace of Bottas' time from last Friday, with both on the softest C5 tyre.

"It has been a positive morning in the car for me," said Kubica. "Times don't matter - P1 or P20, what really counts is finishing the day having completed your testing programme, and we did that. The car felt better compared to last week, we already did a few tweaks and I could feel the improvement. We have a lot of data to go through to fully understand their effect, and two more days to get an even better level of confidence in the car. We know what we have to do."

"It has been a challenging session," added Raikkonen, "but this is quite to be expected during testing. We focused mostly on long runs and trying different setup options, which means the team had to learn how best to prepare the car. In the end, we can be fairly satisfied with our long run pace, although we know there is still a lot of work ahead of us before Melbourne."

Though Verstappen, Perez and Kvyat looked set to challenge Kubica's time this afternoon, it is understood that the gusty winds compromised the track conditions.

There were problems for AlphaTauri, Gasly losing time in the morning due to a dislodged pipe which compromised his planned programme and meant that Kvyat had to do some unplanned aero sensor running in the afternoon.

"I think it was a productive half-day of testing for me," said Kvyat. "When it's a new car you always get interesting results, so I was able to understand it better every run I did.

"We continued with more setup changes you wouldn't normally have time for to try in free practice, to be able to see how the car reacts.

"We're not looking for pure performance yet, we're looking to fine-tune the balance and see how the changes behave in different corners; I think we can be happy with all of the data we gathered. We needed to tick as many boxes as possible today, especially now that testing is quite limited this year and I've only got one day in the car left."

"We had a little issue this morning which compromised our session," added Gasly. "For sure it wasn't ideal as we had planned more laps and we lost some mileage, but these things happen, and we recovered as much as we could in the final hour.

"It was an intense end to the session as we explored different setup directions for the car with the little time we had. There were a couple of interesting things which Daniil continued working on this afternoon. We'll try to maximize every opportunity we have left on track to learn more about the car, I feel there's a lot more to come, but everyone has the same amount of track time so we need to be as efficient as possible."

It was more about long runs this afternoon than race sims, with Norris the first driver to head out after the lunch break.

Raikkonen didn't emerge until almost an hour later, while at Renault, Ocon missed the first two hours of running.

Though the aero rakes are normally reserved for the early running, a couple of teams continued to use them to gather data this afternoon, while flo-vis was a constant throughout the day.

While there is still no real clue as to the pecking order, certainly in the midfield, it was observed that over the course of the day a number of drivers appeared to be running closer to rivals than is normally seen in testing. It's thought that this could be in an effort to see how closely the cars can follow one another.

As was the case this morning, Pirelli provided the teams with C2 tyres developed with the banked corner at Zandvoort in mind.

Frustratingly, but understandably, a number of teams are still refusing to show their hands, and as a result it is almost impossible to predict who's hot and who's not.

That said, Haas is not looking good, while Renault continues to fail to impress. Williams has definitely improved on last year, but how much remains to be seen.

"There was a big agenda for the day," said Grosjean, "including trying different types of tires and different aero parts. That's always fun trying to find the right direction for the future. I think we've accomplished a lot.

"We haven't looked at going fast," he admitted, "we've been working more to improve our understanding of the car and get different parts on and see what they do. I think we've accomplished a lot."