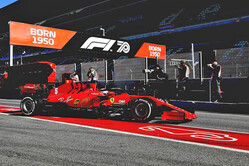 With the first two days of the test offering almost uninterrupted running, bar when Kimi Raikkonen deliberately ran out of fuel late on Thursday afternoon, Friday saw no less than four stoppages.

The first of these, just ninety minutes into the session, was when Sebastian Vettel stopped out on track, on-board footage revealing a total loss of power, which the Italian team subsequently admitted to being an engine issue.

While the old engine was shipped back to Maranello, Vettel was among the first out on track after the lunch break, the German completing a further 60 laps with the new unit.

Ferrari has today revealed the cause of the failure.

"The unit which had the problem last Friday has been stripped and checked in Maranello," said the Italian outfit. "The fault was traced to a non-structural problem with the lubrication system. It’s not a cause for concern and work to correct it is already underway."

While there has been concern at the lack of outright pace from Ferrari over the opening three days of testing, Mercedes has since claimed that the Italian team has been running its engines at a lower performance level than its two customer teams, and will ramp up performance this week.

While Vettel's failure came shortly after Ferrari had appeared to turn up the wick slightly, the German insists that there was never any intention for the team to show its hand during testing.

"You can play around a lot with engine modes etcetera," he told reporters. "Right now the target is not to prove the maximum power of the engine, the target is to do as many laps as possible.

"Obviously, we've done a lot in terms of mileage on the benches to make sure the car is reliable," he added. "But ramping up the engine and so on, it's probably not something you want to do in testing and certainly not to show everyone. It's not on the agenda as far as I know."