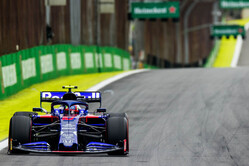 Hardly had the smoke cleared following the issue with Pierre Gasly's engine that caused the second session to be red flagged, than Daniil Kvyat was in the barriers at Turn 12.

What looked to be a repeat of Alex Albon's off at the same corner in the opening session, on closer inspection was revealed to be an issue with the engine that caused the Russian to lose control.

Honda's technical director, Toyoharu Tanabe, though not fully aware of the exact cause of either of the Toro Rosso issues, admits that they are both engine-related.

"Towards the end of the session, the ICE on Gasly's car failed and then Kvyat crashed due to a complete shutdown," he said, "and with the team, we are now investigating the cause of both these problems.

"However, they have no effect on the rest of the weekend from a PU point of view," he added, "as both of them were running 'Friday only' PUs, due to be changed tonight.”

"Something broke in the car, I don't know exactly what," said Kvyat. "The car was out of control and stopped, that's it. I don't think it's going to be a big problem.

"Something locked on the rear and I lost control of the car because of that. Everything switched off immediately," he added.

"Unfortunately, we've had an issue on the PU side for Pierre, which cut his long run short," said Jonathan Eddolls, the team's chief race engineer. "Then towards the end of the session, there was some problem with Dany's car where it completely shut down, and it looks like that's what caused his spin.

"We lost all data and connection, so we have to investigate the cause for it. There's quite a bit for us to work on ahead of tomorrow."

"I think it's going to be tight tomorrow between P6 and P15 as there's only three tenths in it," said Gasly, "so we need to make sure we have a clean run and put everything together for qualifying because the midfield is very close.

"Towards the end of FP2 we had an issue with the engine, so we had to stop a bit before the end of the session which meant we lost a few laps on the long run, but that's how it is sometimes," he added.