Albon goes from hero to zero at Interlagos 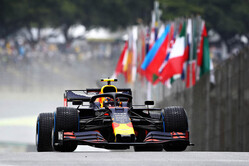 Ahead of today's opening session, the air temperature is 17.2 degrees C, while the track temperature is 21.1 degrees. It is wet and miserable, with conditions expected to remain like this for the remainder of the weekend.

Indeed, in the moments before the start of the session, Bernd Maylander is driving the track in order to determine whether the session can get underway on time. With lots more rain expected it seems a bit silly to even think of delaying proceedings.

Needless to say the session is declared wet, which means full wets are mandatory from the outset.

As we know from previous experience, Interlagos is prone to standing water, not forgetting parts of the track where little rivers run across the track.

With Saturday and Sunday likely to be dry and warm it is unlikely that the drivers will want to do much running if conditions continue like this, after all, with spare parts at a premium at this time of year, why take the risk?

The lights go green, but understandably there is no immediate rush to get out on track.

That said, three minutes in Vettel heads out, followed, shortly after, by his Ferrari teammate.

Returning to the pits following his install lap, Vettel heads out again for a practice start.

The Alfa pair are next to head out, and as they head back to the pits two laps later the rain ceases. Nonetheless, it will take a little time for the track to dry.

Grosjean is next out, which means that Ferrari powered cars have done all the running thus far.

Honda-powered Gasly is next out, followed by Latifi, before Magnussen can make it a clean sweep for Ferrari.

Twenty minutes in and Bottas is the first of the Mercedes drivers to head out.

As Sainz posts the first time of the day (23.689), Bottas suggests it will soon be time for Inters. At which point Sainz improves to 22.149.

Told to "box" in order to preserve his tyres, Sainz stays out for another lap.

The cameras pick up on Hamilton's car, which waits patiently in its garage for the world champion. According to the tyre blanket it is fitted with Inters.

Thirty minutes in and Leclerc is the first driver to head out for a second run, albeit still on Inters.

The only drivers who haven't appeared are Albon, Verstappen and Hamilton.

Leclerc raises the bar with a 21.971, as Hamilton heads out on his Inters. He is followed by Verstappen who is also on the green-banded rubber, as is Albon.

Vettel heads out again, but on the full wets still, as Ferrari is clearly carrying out back-to-back tests. The German crosses the line at 22.490, 5.205s off his teammate's pace, and is subsequently told to pit for the green-banded rubber.

"I want to do one more lap for reference," says Kvyat when told to pit for Inters. However, warned that he mustn't "destroy" his wets he duly stops.

As one would expect in these conditions, a number of drivers have little moments but nothing of note.

Shades of Orange Juice as Hulkenberg warns that he needs to pit as his front-right Inter is beginning to "rip it up a little bit".

Indeed replay shows the German hanging out his rear end as he exits Turn 12, Russell having had a moment there just a minute or so earlier, the Briton actually getting his right-rear on the grass..

Having gone quickest (17.041), Vettel suddenly slows, before heading back to the pits.

After 55 minutes only 12 drivers have posted times. Vettel is quickest, ahead of Leclerc, Sainz, Hulkenberg, Ricciardo, Gasly, Norris, Kvyat, Russell and Magnussen.

Asking about the anticipated conditions in FP2, Sainz is told that the chances of rain are "lower".

Stroll is told to watch the kerb at the exit to Turn 13. Of the 15 drivers that have posted a time, the Canadian is currently 12th.

Giovinazzi has completed the most lap thus far (16), ahead of Sainz (15), Kvyat and Norris (14). Perez and Verstappen have completed 1 lap apiece and Hamilton 2.

With just under 20 minutes remaining, DRS is enabled which mean we could yet see some slick running.

Albon goes quickest on the Inters, the Thai driver, who has been retained for 2020, stopping the clock at 16.399. The youngster subsequently suggests that it will soon be time to switch to Inters.

Russell and Raikkonen have the track to themselves, both opting to stick with the Inters.

However, with 6 minutes remaining, Leclerc heads out on softs, followed by Vettel, and Verstappen who are also on the red-banded rubber, and the Mercedes pair who are on mediums.

The crowd cheers as Verstappen spins in the Senna Esses. "It's very slippery," warns the Dutchman, while teammate Albon is off and in the barriers at Turn 12.

Re[play shows the Red Bull driver losing the rear of the car and subsequently sliding onto the grass. Game over.

"****," says the youngster as the session is red-flagged, Race Control that it will not re-start.

Russell is eleventh, ahead of Magnussen, Stroll, Raikkonen, Giovinazzi and Latifi.